Boasting a Harding Inc heritage, ETG Workholding provides access to more than 100,000 workholding products and accessories. Andrew Allcock explains the background and outlines what’s on offer and what’s to come

This position didn’t come out of the blue, however. ETG Workholding has been built on the ‘ShopHardinge’ website, established by US machine tool maker Hardinge Inc in 2009 (http://shophardinge.com still serves the American market); this itself builds on Hardinge’s long history (see box, below).

In 2013, Hardinge Inc bought chuck manufacturer Forkardt and today describes itself as “one of the [world’s] largest manufacturers of workholding systems”.

The ‘ShopHardinge’ activity was brought to the UK two years after its US launch, in May 2011. Beckett headed up that operation, too, when there were a mere 65,000 products on the books. Two years after that, Southam, Warks-based ETG became Hardinge’s UK operation for sales, service and customer support for both Hardinge and Bridgeport machine tool brands, as well as taking on the workholding equipment activity.

A year or so ago, ETG Workholding moved from Southam to Coventry, where bespoke workholding specialist Hyfore has its operations and whose membership of the ETG family pre-dates the 2013 Hardinge portfolio arrival.

A new ETG Workholding website was launched earlier this year, and Beckett explains the change from the initial ShopHardinge to the current expanded range: “The original offering would have taken in standard C-style collets, collet chucks, expanding mandrels, collet blocks, some rotary tables and one or two vices, plus back-end toolholders – BT and VDI; but mainly everything that was manufactured at Hardinge in America.

“Since becoming ETG Workholding, we still have exactly the same number of Hardinge products on the website, which accounts for about 50,000, but the range has grown to take in over 100,000 items. This is as a result of us wanting ETG Workholding to be a one-stop shop for workholding. So you can buy from us anything from a simple T-nut or hold-down set right up to a rotary table, or even CMM inspection service from Hyfore.” 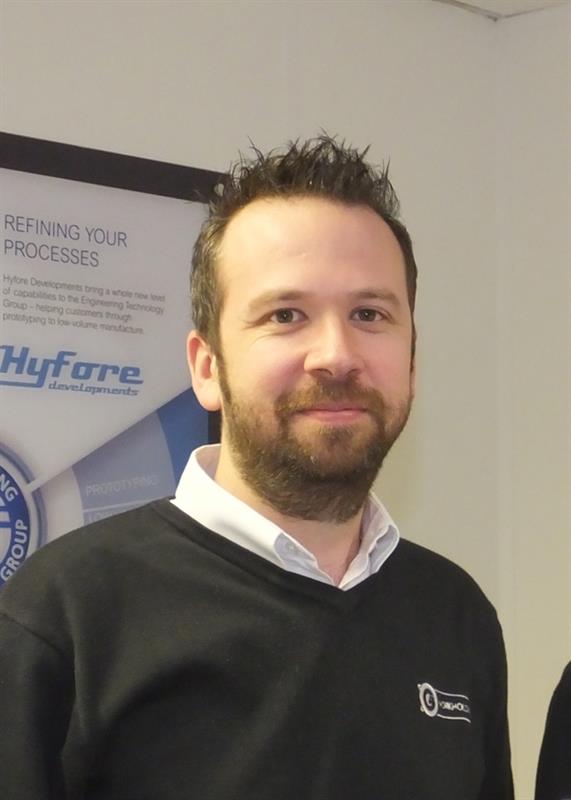 Now, people don’t order a £5,000 rotary table unit from the website, he says, but this does give the company the lead, as people will phone up after seeing them there. A rotary table also requires installation services, of course, so is not a pure product-only sale. Website order value runs from £50 to £2,000, with most below £1,000. Signposting the website is key, with the company employing Facebook, LinkedIn, Twitter and YouTube channels (http://is.gd/eHDc9X) to capture interest, and it is considering Google AdWords and apps, too, in an effort to better reach ETG’s database of 40,000 potential customers.

When launched as ShopHardinge, the website drew 10 to 20 visits/day, hitting 100 just prior to the move to ETG Workholding, and with the new website is currently running at 120 visits/day. Beckett underlines that the website is a good resource for potential customers ahead of any order placed, because it can be used to support quotations. “For all of the products, the website has prices and stock levels [£80,000 worth is held at Coventry], plus delivery information for non-stock items.”

There are some 120-130 customers that are in near-daily contact via the website, but distributors are key in terms of volume. ETG Workholding operates through around seven distributors in the UK, with three of those considered core. Expansion in this area is under consideration, including gaining distributors in Europe.

End users still often prefer to go to a distributor, presumably because they have need for more than just workholding and because a distributor can aggregate this, adds Beckett, who emphasises that ETG Workholding can get the same enquiry from many different routes – multiple distributors and the end user, too. “People tend to need to get three of four quotes before they can place an order,” he says.

The cross-linkage with the other ETG activities effectively expands ETG Workholding’s sales force and opportunity, with ETG machine tool sales offering a platform, either pre- or post-delivery.

“Once I know what machine has been purchased, I’ll put a relevant ETG Workholding welcome pack together for the customer,” says ETG Workholding’s product manager of the post-sales situation, while for pre-sales he’ll work with ETG in delivering a complete solution. There’s also a workholding presence at ETG’s ‘permanent trade show’ at Southam, too. (But the workholding products are, it is stressed, suitable for use on machine tools from many suppliers.)

A further benefit is that ETG machine tool salesstaff, applications engineers and service engineers (some 30 individuals in total) will leave literature with potential workholding customers, with that also driving contact and sales. The same thing works the other way round, with machine tool interest being fed back the other way when Beckett visits customers, too. There’s similar cross-over between ETG Workholding and bespoke fixturing maker Hyfore, as well, although this is smaller, in terms of personnel numbers.

This cross-selling has seen a significant increase over the past year, while there are long-term plans to supplement efforts through additional ETG Workholding staff able to take the message direct to customers.

But with a strong Hardinge heritage and continuing relationship with that company that takes in standard and special products, the issue is one of getting across the message of a wider product offering, explains the workholding product manager: “We are trying hard to change people’s perception of what we are and what we can offer – Midaco, Buck, Nikken, AMF, Bott and Blum are the main non-Hardinge brands. Reputable names and products that will deliver reliable performance that will see customers return, just as is the case with Hardinge products. They are the best.

Once people start to understand the full range that we offer, I can only see our customer database increasing.”

And the range offered is expanding, too. The Halter machine tool tending robot offered by ETG is also available through the ETG Workholding website as an accessory, while Bridgeport Series I Standard knee-mills are another offering.

And in a move that sees it working with sister company Hyfore Engineering, a standard fourth-axis trunnion kit involving standard Nikken equipment and Hyfore-made plates/blocks has been added to its range. Ongoing, there’ll be more well-known workholding brands added, just in case 100,000+ wasn’t a big enough range.

Machine tool maker Hardinge Inc was established in 1890, specialising in lathes, and has supplied tens of thousands since, introducing its ‘super precision’ HLV toolroom lathe in the late 1940s that would become the company’s trademark machine (video: http://is.gd/50XXCt). This used the company’s already existing 5C collet system (1 1/16-in through round), which today remains Hardinge and ETG Workholding’s best selling collet size and system. Hardinge Inc claims to be the world’s largest manufacturer of collets, feed fingers and pads (video: http://is.gd/XX46EK).

While there are 100,000+ individual products available from ETG Workholding, these break down into five main groups:

This article was first published in the tooling and workholding supplement of the May issue of Machinery magazine.