JCB started assembling a range of own-design diesel engines to power its vehicles in 2004. Volumes have since ramped up and now the company has, following a £10 million investment, brought in house related machining work. Andrew Allcock made a return visit to the facility to catch up with latest developments

JCB took an unorthodox route to demonstrate to its potential market that the company’s first production engine would be up to scratch; it built the DieselMax high speed car to establish a diesel-powered car world land speed record. This showed comprehensively that the four-cylinder, 4.4 litre JCB444 engine, as it was then called, was the ticket. It was, and continues to be so, having set and continuing to hold a world land speed record of over 350 mph. Today, the DieselMax car sits in a special area to the side of the engine assembly area at JCB’s Power Systems factory.

In 2006, when Machinery called by the Dove Valley Park, Foston, Derby-based facility (article: https://is.gd/fugasa) to see how things were panning out, the ‘yellow digger’ specialist was manufacturing 100 engines/day, with the unit powering half of the company’s annual 45,000 vehicle output at the time. It was, and is, also used to power generator sets. At introduction, the engine design was said to be good to take the company up to so-called Stage IV emission regulations; the engine design is now at Stage IV/Tier 4 Final Base and has been renamed DieselMax and EcoMax, depending on emission rating (EcoMax starts at Tier 4i and Tier 4f, in fact). As of earlier this year, the company has produced more than 400,000 engines.

This perceived simplicity of four base engines has huge complexity, as there are around 500 different bills of materials (BOMs) for engines, explains operations manager Robert Taylor. But scanning of both the engine BOM and parts to be assembled means that it is possible only “to build to process”, he adds. A “no faults forward” regime operates. 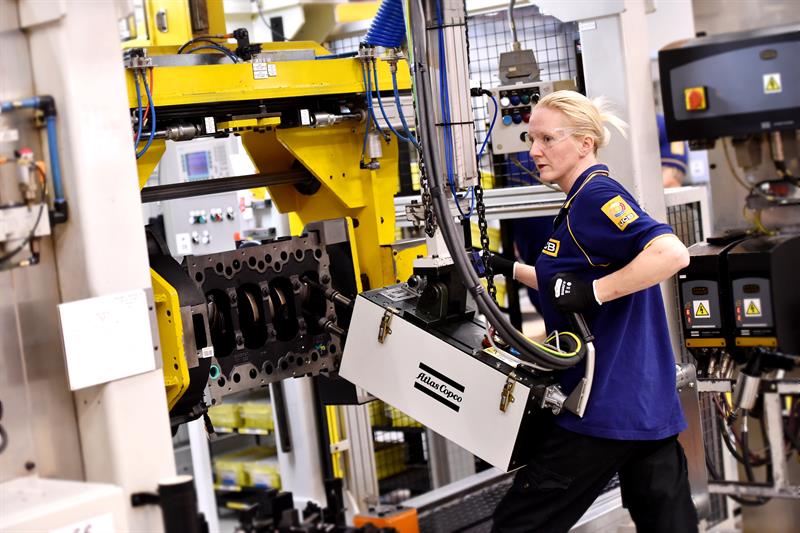 The UK plant has a capacity of 50,000 engines, most of these being four-cylinder units; for the larger engines, capacity is 8,000 units. JCB Power Systems employs 300 in total, with 140 across two shifts for the assembly activity and where output capacity is up to 200 engines/day across two shifts (JCB’s total UK employee figure is 5,500, by the way). Takt time for 4.4/4.8 litre engine build is 4.2 minutes and 3.5 minutes for the new 3 litre model. The challenge, says Taylor, is to reduce 4.2 to 3.5 minutes. The six-cylinder engine takes 20 minutes to assemble in its separate area.

Alongside the assembly lines there are now three engine test areas, an additional one having been added to support 3 litre engine assembly, although 4.4/4.8 litre units can also be processed. In addition to increasing engine assembly variants and numbers, there has also been an increase in in-house engine sub-assembly build. 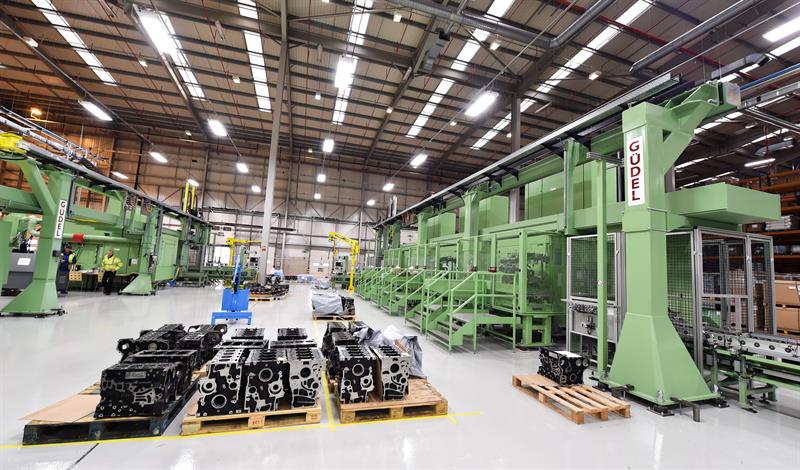 JCB’s global engine capacity is greater than this UK output, incidentally, the company having opened a factory in India for 4.8 litre DieselMax engines in 2010 and where there is capacity for a further 50,000 units per year.

With the introduction of the 3 litre model, the increasing volumes of engines have this year made sensible the pursuit of related machining tasks.

In addition, says Alan Tolley, group director, engines, in-house processing offers tighter control over quality (although he is keen to point out that there haven’t been any issues), better speed of response, plus faster reaction to any design changes required.

From the outset of its engine building activities, castings for blocks, cylinder heads and bed plates have been sourced overseas; Germany for blocks and Turkey for the other two. Mahle Powertrain, Wellingborough, Northants, has so far undertaken the machining of the parts (Machinery article: https://is.gd/ufevuw). But as of mid-July, JCB has taken on finish machining of the cast iron cylinder head and block/bedplate assemblies, with all castings now sourced in Turkey, although not from the same supplier in each case.

Dan Kitchin is the principal engineer in charge of the machining set-up; he made a move out of the design office and oversaw the introduction of the six-cylinder assembly line, including sourcing castings and machining from Turkey. The new machining installation is for four-cylinder engines only, the finish machining of cylinder heads and block/bedplate assemblies. Rough machining is undertaken by the Turkish foundries and is seen as derisking, since that is when casting problems are most likely to show themselves (for the 7.2 litre engine, all machining is undertaken in Turkey). As at Machinery’s 20 July visit, some 400 engine sets had been produced in two-and-a-half weeks, with production starting the week before the visit.

The machining system takes in four Heller (https://is.gd/nujupe) MC 20 horizontal machining centres; three are in the block/bedplate line and one supports cylinder head manufacturing. All machines in the block line perform identical operations; block/bedplate machining takes 15 minutes, so there’s a five-minute cycle per output unit, slightly longer than the assembly takt time figure. The machines are equipped with two pallets, one each fixtured for the 3 litre and 4.4/4.8 litre engines. Cylinder head machining takes five minutes, again a little longer than assembly takt time, but all parts can fit onto one pallet fixture, so it’s a one-in/one-out pallet arrangement. JCB has the capacity to produce 45,000 engine sets every year. 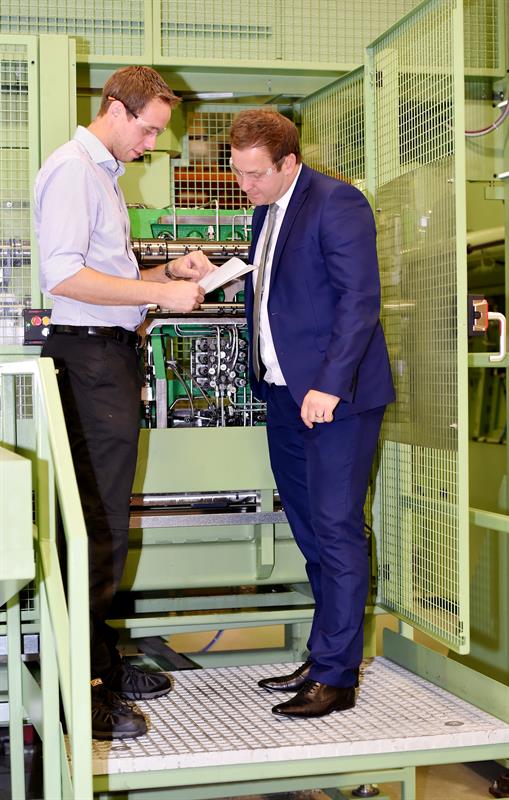 Both cylinder head and block/bedplate machines are served by Güdel gantry systems (https://is.gd/irodib), these picking parts up from in-feed conveyors and transporting them to, in the case of the block line, the appropriate one of two fixtures. Just as in the assembly line, part identification and scanning makes sure that there is a “no faults forward” regime, underlines Kitchin.

Tooling from Mapal (https://is.gd/pamumi) is extensively used in the machining centres, indeed, Mapal is tasked with setting tools onsite, using a Kelch (https://is.gd/cogutu) Set Line V9. Again, this is derisking, offers the principal engineer, in this case by removing JCB responsibility for a variable that could affect the machining process.

After block/bedplate machining, there’s a Gehring bore honing machine (https://is.gd/feguqu), with a Neiberding (https://is.gd/pajohe) air-gauging station following that. Blocks are bore-gauged at a rate of one in 10 per machine, with two per machine per day going for full CMM audit. For the cylinder head line, the same inspection regime is applied.

To make way for the new machining system, which has been set up in existing space located in an adjacent hall to the assembly area, parts stores had to be severely reduced. This, Kitchin says, presented challenges in part scheduling and delivery frequency, now that local stockholding had been slashed.

With the machining system being part of a global supply chain having its roots in Turkey, the company holds two weeks’ buffer stock of raw castings at its warehouse in Newcastle under Lyme, with, currently, 760 engine sets/week (cylinder head plus block/bedplate assembly) delivered in 20 containers/week, arriving in the UK after a shipping period of four weeks.

£200,000 investment in automated machining at Arrowsmith