Robotics experts at the Manufacturing Technology Centre have developed an autonomous robotic rat which can scurry along underground pipes carrying out inspection work.

"Ratty the Robot" is a tetherless wheeled inspection robot with a laser-based navigation module, with the potential to carry out tasks in environments which would defeat most robots. The invention has the potential for cost and efficiency savings for utility companies as well as reducing human exposure to hazardous environments and preventing pipework leaks.

The robot's ability to access and work autonomously in difficult conditions has the potential for major costs savings for utility companies as well as removing risks associated with working in hazardous environments. As the robot can self-drive it reduces the need for a human operator.

MTC advanced robotics research engineer Dr Mahesh Dissanayake said the pipe-crawling robot could give the utilities sector opportunities for cost saving combined with increased efficiency and demonstrated how robotics and automation can benefit a wide variety of sectors.

"This proof-of-concept robot can travel in confined spaces, inspecting networks while working fully autonomously. It opens up the opportunity of inspecting far more of the underground network at a much-reduced cost, reducing failure rates and flagging up potential problems” he said. 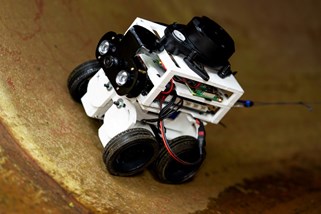 Currently, most advanced inspection work of drainage, sewage and gas supply pipes is carried out by tethered devices managed by operators, which is costly, slow, and labour intensive, with difficult to reach areas. The MTC's concept robot is tetherless, with the ability to operate autonomously and navigate confined areas, enabling the operator to focus on the inspection.

The robot has successfully undergone simulated trials at the Synthotech test facility in Yorkshire. Simon Langdale, engineering director at Synthotech, said, “It’s been great to put this proof of concept through its paces in a range of simulated environments. Automation of inspections for pipes is a key area that can help build better understanding of the complex infrastructure underground.”

Age of the robot