​The same team that developed the technology behind Amazon’s ground-breaking family of front-lit Kindle devices has developed EcoCooling, a dry, clean and environmentally friendly method to lubricate metal workpieces with ionized and cooled air, avoiding the need for metalworking fluids, it is claimed.

The elimination of metalworking fluid costs, easier swarf recycling, smaller machine tools, reduced maintenance, higher productivity and the avoidance of toxic waste plus fumes and vapours are all claimed benefits.

The group behind this latest development includes scientists, engineers and experienced businesspeople from various disciplines, with some three decades of research and application now placing EcoCooling ready for wider application. Says Leo Hatjasalo, co-founder and CEO of Finnish company EcoCooling: “Workshops have wanted to get rid of fluids and many have tried to find a solution to the problem, but with poor results. Now we have the answer to this demand, since EcoCooling can be used even with the hardest known metals, like chrome, titanium and tungsten carbides.

“EcoCooling is based on the fact that ionized air penetrates the cutting zone and forms a dry lubricant that decreases cutting friction and generated heat, at the same time speeding up the oxide layer formation. The process is patented on all continents, and at the moment we are validating it to include all types of machine tools.”

While reduced metalworking fluid costs are an obvious benefit, there is also the promise of improved productivity through higher cutting speeds, reduced cutting tool wear and reduced maintenance costs, the Finnish company says.

And since metal chips are not contaminated by any fluids, they can be recycled without the need for cleaning, while toxic fluid waste and fumes are eliminated, in addition to minimising CO2 emissions, since no oil is used, the company further adds. Furthermore, since the EcoCooling unit is compact, smaller and cheaper metalworking machines are also another outcome.

Confirms Hatjasalo: “The unit does not need any service and it has proved to prolong the lifetime of the cutting tools significantly. The system can also be easily retrofitted to older machine tools.”

EcoCooling has been successfully trialled in numerous commercial tests in demanding surroundings internationally in recent years. Now that the process has been proven, the aim is to create a versatile EcoCooling product family that includes all machine tools in addition to just turning machines.

Says Hatjasalo: “We are also planning to integrate the system to suit different CNC machine tools and to create optimal solutions for all machine tools and workshop environments. However, for that purpose we need more funding than we can raise on our own. Therefore, the next step is to find an industrial partner to help us to commercialise EcoCooling globally and to develop the ways the technology can be used.” 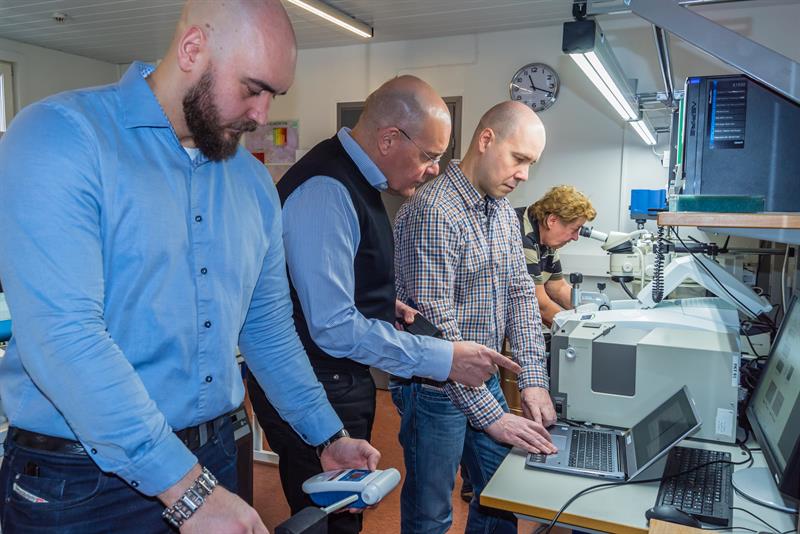 The experienced team behind EcoCooling is partly the same that developed the front-lit technology used in Amazon Kindle-devices. From left to right: Juha Hatjasalo, Leo Hatjasalo, Jori Oravasaari and Jarmo Maattanen

ECE EcoCooling Engineering Ltd is part of a portfolio of Finnish high-tech companies developing world-leading technologies, like the front-lit technology used in Amazon Kindle-devices. It was developed and industrialised by the portfolio company Modilis Ltd, which was sold to Amazon in 2010.

The importance of metalworking fluids