​UK car production rose significantly, but artificially, in April according to the latest figures released today by the Society of Motor Manufacturers and Traders (SMMT).

Britain made 68,306 cars compared to just 197 a year ago when Covid-19 restrictions effectively halted manufacturing.

When compared with a five-year average, production was down -42.9% for the month and -31.1% for the period January – April, reflecting the scale of the challenge facing the industry as it seeks to recover from the pandemic.

The April figures also reveal UK automotive manufacturing’s increasing shift towards electrified vehicles. In the month, 22.8% of all UK car manufacturing was for battery electric, plug-in hybrid and hybrid cars, while in the year-to-date alternatively fuelled model production is up 33.1% on the same period in 2019, demonstrating the UK industry’s commitment to meeting demand for these ultra-low and zero emission vehicles.

Compared with 2020, since January, production for the UK market has declined -3.1% while car exports have risen 22.5% with more than eight in every ten (83.3%) cars made shipped overseas. So far this year the European Union remains by far the most important destination for British cars, taking 52.1% of all exports, followed by the US (17.4%) and China (7.4%).

Mike Hawes, SMMT chief executive, said: “April’s figures were always going to be exceptional as factories were closed at this time last year amid the first wave of the pandemic. However, the situation for UK car manufacturers remains challenging, particularly with the worldwide shortage of semiconductors affecting output.

"While it’s good news that the UK is on track with its Covid roadmap back to normality, we still need strong domestic demand and given we’re export-led, confident overseas markets to drive a recovery, both for the automotive sector and for the wider economy." 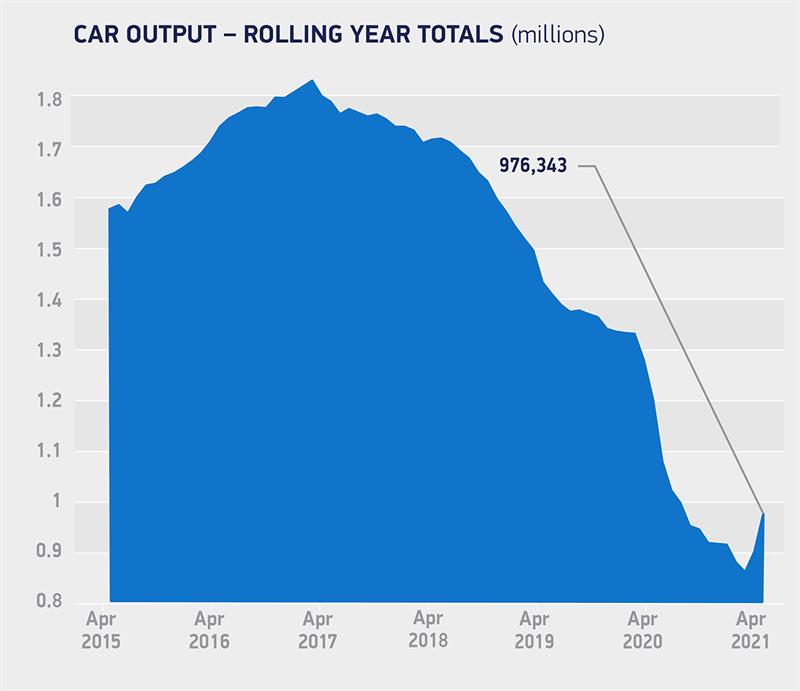