We need to talk about solvent

There is a continued need for solvent-based cleaning. With related plant cost a stumbling block in many projects, an event responded to that and set out the bigger picture. Andrew Allcock reports (extended article)

Speaking at an event at the Royal Air Force Museum, Cosford, Dave Elliot, chief executive of the Surface Engineering Association (www.sea.org.uk) and also president of European body CETS (European Committee for Surface Treatment), spoke about the pivotal role of cleaning in the UK surface engineering sector, with the ongoing important role of solvent cleaning the central element (full presentation: https://is.gd/akesax). The day was organised by IB Industries (07947 370205), the UK agent for Hoeckh, which manufactures solvent degreasing equipment, as well as aqueous plant. 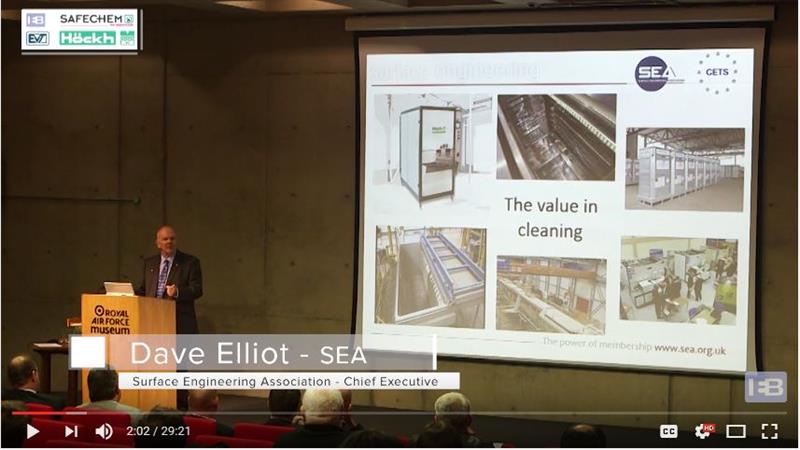 Watch the full presentation at https://is.gd/akesax

Elliot said that CETS is currently working with the EU’s Integrated Pollution Prevention and Control (IPPC) bureau on a ‘best available technique reference document’ (a BREF) called STS that concerns surface treatment using solvents. IPPC, Seville, was set up in 1997 to organise an exchange of information between Member States, industry and non-governmental organisations that promotes environmental protection on Best Available Techniques (BAT), associated monitoring and developments in them (see https://is.gd/qupequ).

He then set out to tackle four key points: defining the size of the UK surface engineering market; stating why cleaning is important; explaining the total lifecycle approach; and highlighting the need for a sustainable solution.

Before getting underway, he first confronted the biggest issue: that of modern solvent degreasing equipment cost, which can range from £80,000 to £120,000, he offered, adding: “Yes, there might be up-front capital costs, but you need to look at lifecycle costs, and you may then have a different view.”

Within Europe, the UK is the fourth largest market after Germany, Italy and France. Not all of this is metal; in construction, for example, glass can be subject to coating. Elliot further broke the UK activity down into types of surface treatment, taking in vitreous enamelling and electro-plating to total nearly three-quarters of the market, with many others after that. But his key point in all this was the importance of cleaning: “The most significant factor is that before you can carry out any of these surface engineering processes, you have to make sure that the surface has been cleaned properly.

So this £12.8 billion depends on cleaning, and that depends on getting it right, but coating is just a small percentage of the value of the finished product. “So we are talking about a significant amount of UK GDP,” Elliot was keen to stress.

So what can go wrong? SEA’s leader pointed to Fitz’s Atlas of Coating Defects (https://is.gd/axazev); there are many tens of issues identified, with in excess of 180 colour photographs that highlight various named problems. Elliot cited some of his favourites – ‘fat edge’, ‘grinning’ and ‘rust jacking’. “What do a lot of these defects have in common? They are caused by poor, insufficient or incorrect cleaning,” he underlined. And with so many problems, a few of which he exampled visually, he stressed that users must understand the capabilities of any cleaning system. Basically, it must be fit for purpose, so that “there are no issues down the line”.

In noting the key point that, for some, there is no alternative to solvent cleaning, he pointed to American publication Pollution prevention and control technologies for plating operations (second edition 2009, https://is.gd/arigej), from which he offered this quote: “The surface engineering sector has come a long way since the first edition [1994], but it is not entirely clear how much politicians have learned in the meantime.”

By this he is referring to issues arising from alternative, more environmentally friendly cleaning substitutes for solvent that the book’s publisher, the National Center for Manufacturing Sciences, Ann Arbor, Michigan, had collated by talking to companies about their efforts to replace solvents. And referencing an expert speaker at the US surface finishing show/conference ‘Sur/Fin’, he quoted: “‘Cleaning operations have frequently [wrongly] been regarded as of minor importance’. Lots of people say that it’s a necessary evil, they don’t see it as a key part of the operation.” And finally, again referencing expert voices from Sur/Fin, Elliot underlined that the cleaning chemicals used must be chosen along with the equipment that can properly use it.

To add further weight to his ‘solvent is still required’ message, he pointed to another reference source, Handbook for Critical Cleaning (second edition, https://is.gd/norawa), authored by two leading experts. The book highlights some of today’s challenges, which include increasing product performance, miniaturisation, complex supply chains, economic pressures, plus safety and environmental constraints. Elliot quoted from this: “‘Cleaning is essential for proper performance, optimal quality and increased sales. Inadequate cleaning of product elements can lead to catastrophic failure of the entire system and serious hazards to individuals and the general public’ – you have to get your cleaning system right.”

Turning to lifecycle costs, Elliot pointed to information in The Journal of Cleaner Production (https://is.gd/gojuso) that contrasts the lifecycle of a chlorinated solvent and that of an aqueous detergent alternative. “The key point is that you need to look at the whole lifecycle, not just the little cleaning bit [of the process].” Taking a partial view would indicate aqueous as the simpler, less onerous route, he says, adding: “What initially may have looked the cheaper option could quite easily end up being far more expensive in the long run.” You have to undertake a thorough, full analysis, is his point.

As to sustainability, Elliot references a European Round Table on Sustainable Production and Consumption conference session, which looked at what has happened in the solvent cleaning area over recent years. This found that per 100 kg of oil removed, solvent emissions and solvent waste have moved from 520 and 233 kg respectively for open-top tank processes to 1 and 3 kg respectively for today’s closed systems and chemical leasing, the latter as offered by Safechem Europe (01384 296613), a supporter of the event.

Against such vastly reduced solvent usage, the up-front, seemingly high cost of related solvent degreasing plant must be set, he concluded.

Safechem Europe (01384 296613) has been recognised by Cefic, the European Chemical Industry Council, picking up the ‘Product Stewardship Special Accenture Award’ at the European Responsible Care Awards. This acknowledges its chemical leasing business model, Complease, that helps reduce solvent consumption while improving the cleaning process and its results. The awards recognise achievements in improved health, safety and environmental standards.

Surface finishing expert Roesler (0151 482 0444) has provided a complete solution to an unnamed automotive part subcontractor where requirements were: a finished surface free of abrasive particles <30 micron; metallic particles <600 micron; and residual contaminants per single part <1.5 mg. A custom engineered aqueous washing solution prior to, as well as after, the vibratory finishing process was provided. 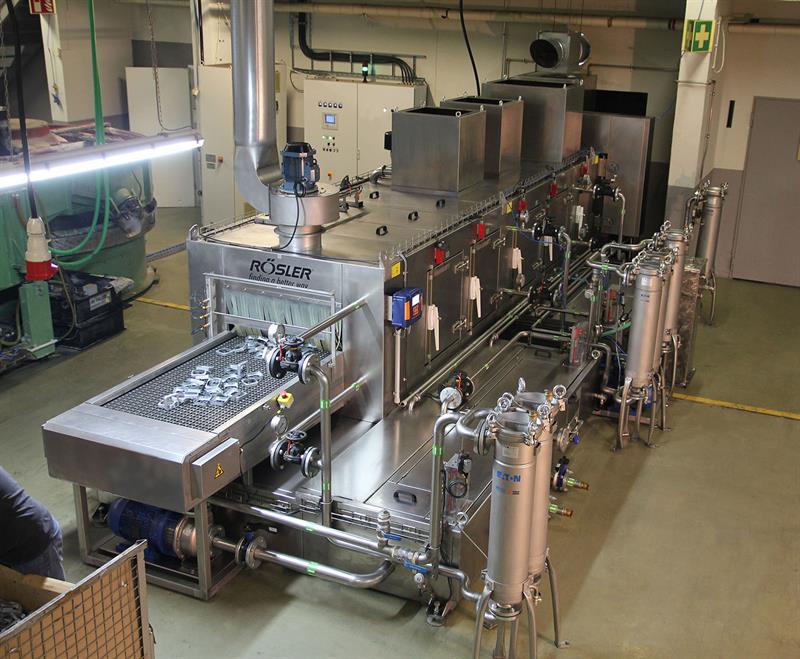 The finish wash system, with unloading into a clean room

Finished parts are manually placed into the subsequent finish washing machine. In this, four parts are positioned in fixed positions and pass through two aqueous wash stations, followed by rinsing and passivation. Parts are exposed to different types of cleaning liquids from above and below, with pressure and volume for upper and lower spray nozzles individually adjusted for every processing station.

After each station, the parts are exposed to an intensive blow-off that helps minimise the carryover to the next station until the washed parts are finally dried with hot air.

The machine of all-stainless steel construction is equipped with an oil skimmer and a high performance filter system having mesh sizes from 200 down to 20 micron. The part unload station is located in a clean room.

Says C4 Carbides process engineer Chris Norman: “We are really pleased with the results we’ve seen since installing the new MecWash washer and can’t wait to complete the commissioning of the second washer. The service offered by MecWash has been excellent, its team has been very helpful and knowledgeable which has ensured we achieved our budget and installation targets.

“It seems such a long time ago now when I think back to how we routinely used solvents to clean the cutting tools. I’m glad this unpleasant and time-consuming process is firmly confined to history and we are continuing to move forward with this proven technology from MecWash. I would definitely recommend installing one of their systems.” 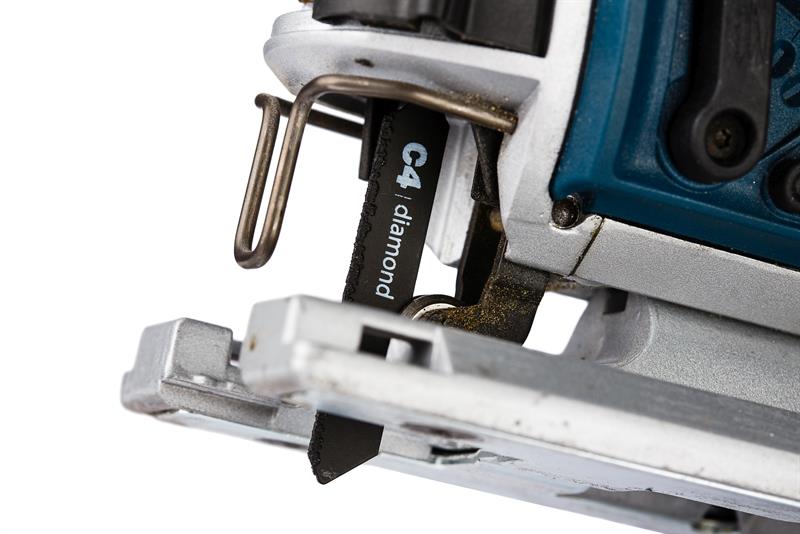 No need to talk in code