Spanning machining and welding, the Nuclear AMRC aims to beef up the UK's supply chain for civil nuclear power. Now fully kitted out, the factory is open for manufacturing research projects, large and small. Will Dalrymple visited

Built on the Advanced Manufacturing Park between Sheffield and Rotherham and uphill of elder sibling the Advanced Manufacturing Research Centre with Boeing, the Nuclear AMRC employs 80 people in a super-sized shopfloor and offices tucked under its eaves. Since 2009, it has been open to all UK companies to help them win work. Research projects typically last 3-4 months but, large or small, they start with the same scoping exercise, are taken from start to end by a project manager, with the assistance of a technical lead as well. Says operations director Stuart Dawson: "We are a real hybrid between academia and industry. We have both big-brained creative academics and practical and experienced industrialists that provide realism, plus professional project managers. And the emphasis is on delivering projects to industry timescales; there is no linkage to academic outputs." The centre's £26 million collection of machine tools and welding equipment may be the best at any research facility in the world. Late last year the organisation installed a Dörries Scharmann vertical turning/milling lathe with 5 m swing and 3 m working height (supplied by Starrag UK 0121 359 3637) and a Soraluce FX12000 horizontal milling centre with 12,000 X-axis travel (supplied by TW Ward CNC Machinery, 0114 276 5411). And as at Machinery's late November visit, finishing touches were being put to a temperature-controlled factory extension within which resides a Hexagon DEA Delta CMM (01952 681300) with a 6,300 by 3,000 by 2,000 mm working envelope (X, Y, Z). Parts up to 15 tonne will be measured here, having been 'floated in' on an air table. Already installed, welding capacity includes an electron-beam welding chamber capable of 100 mm thick welds (Pro-beam, +49 89 899 233-0), a 15 kW cell for diode laser cladding (Laser Lines, 01295 672500), arc welding equipment and more. 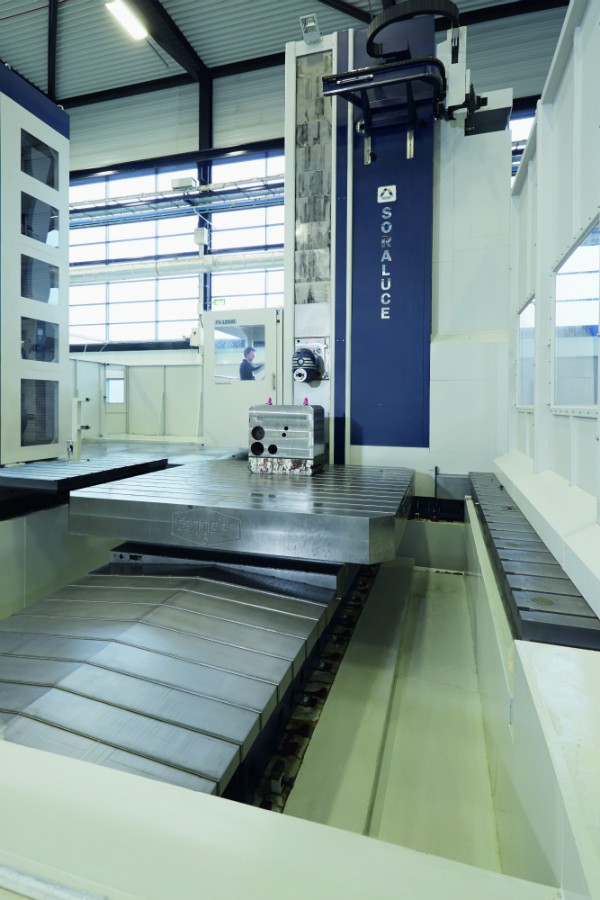 The Soraluce FX12000 is now the largest machining centre at the Nuclear AMRC "Unless people have been to our facility, they might not understand that we are not a university lab; we can do a full-scale prototype in its actual material," says business development director Stuart Harrison. Part of the Nuclear AMRC's mission is help UK businesses reach the very high nuclear standards, both in terms of actual metalcutting and also the stringent paperwork trail (see below). The difficulty of working in the nuclear industry, compared even to other high hazard industries such as oil and gas, is so well known that it has its own term, the 'nuclear delta.' For example, irradiation during the working life of a steel component in a nuclear power plant tends to make it brittle; as a result, components for duty in nuclear environments start life as ductile as possible. "There are big machinability issues with high ductility steels," Dawson highlights. By this he means that ductile materials tend to work harden when machined, with this tending to dull cutting edges. To reduce this problem, the Nuclear AMRC is looking at different tooling geometries, cutting parameters and machining strategies, explains production engineer Andrew Wright, who offers that ductile materials tend not to break off into small chips when cut. This is a particular problem in deep-hole drilling, he advises, where a long piece of swarf could jam in the drill bit, locking the bit in the hole and causing the tool to break. There are other challenges in the deep-hole drilling area, too. Producing holes in tubesheets, common for heat exchangers in the nuclear industry, is a particularly demanding application, and is often achieved by using a dedicated deep-hole drilling machine. In an effort to use less specialised equipment, the Nuclear AMRC has undertaken trials on its Starrag HEC 1800 large format horizontal machining centre for heavy duty milling and boring. It has successfully bored holes of from 13-25 mm diameter to a depth of more than 500 mm in specialist alloys. The key factor in its success has been the machine's high pressure (160 bar) coolant system that breaks up the swarf. The organisation is pushing that envelope even farther with its new Dörries VTL, which has the highest pressure coolant at the Nuclear AMRC site – 350 bar. The machine will be used for the turning of stainless steel and nickel alloys. Because of the ductility of the materials, machining operations for large components are periodically interrupted to crane out the balls of swarf that accumulate, because the material will not chip. High pressure coolant directed to the cutting edge will prevent this situation by breaking the chip and speeding up production. Studying how the metal chips helps researchers understand whether they are in safe territory. 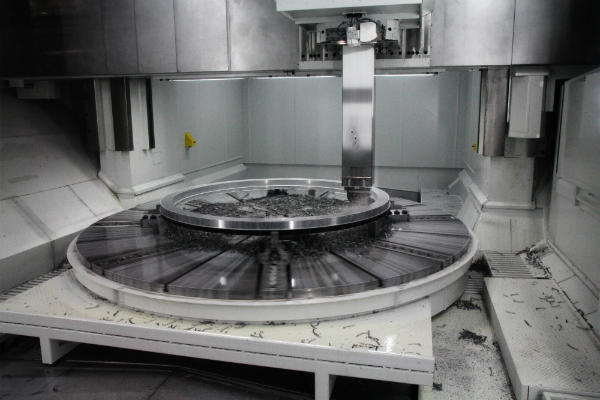 The Dörries VTL machining a ring sample. Maximum workpiece diameter is 5 m "Productivity is great, but if you are right on the knife edge of scrapping the part, it is a false economy. Productivity with security is what we're about here," Wright underlines. This is echoed by Dawson, who says that the nuclear power industry has a big focus on process security – right first time – in contrast to aerospace's greater emphasis on reducing cost and cycle time, partly because of the risk that it might have a knock-on effect somewhere else. Another area of investigation has been complex turning operations, such as contour boring or large flange work, using facing head attachments on horizontal machining centres. The Nuclear AMRC now has two such machining units for this undertaking, including the just installed Soraluce FX12000, now its largest machine. Wright says that, like deep-hole drilling, facing head work is a black art, a highly skilled operation. "We don't want to deskill it, but we need to try to minimise risk, so that we are less reliant on highly skilled operators, who are becoming harder to find." The Soraluce joins the organisation's Mazak Orbitec 20 (01905 755 755), which was the first machine of its kind in Europe at installation. The Mazak machining centre can generate turned features up to 508 mm diameter, even if they are off-centre, while keeping the workpiece stationary. In similar vein, the Soraluce FX12000 travelling-column horizontal machining centre can use its D'Andrea facing head to perform turning operations. "With large gearbox casings, you can do milling, then pick up the facing tool and then do complex contour boring work without having to take the part off the machine tool, thus reducing set-up time," Wright points out. 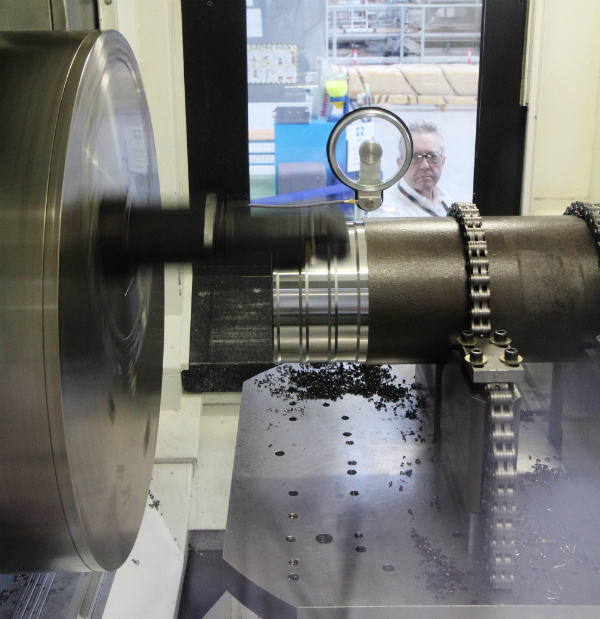