The end, as we know it: tricholoroethylene passes its sunset date

Trichloroethylene passed its REACH sunset date last month. Users of the solvent should be aware of what this signals, especially those operating enclosed, not sealed, systems. Andrew Allcock explains

Degreasing solvent trichloroethylene (TCE) saw its REACH sunset date arrive last month, on 21 April, which would have meant that it could not be supplied or used after that date had “authorisation” not been sought, and granted, for its continued use. (REACH is a EU regulation – Registration, Evaluation, Authorisation & restriction of Chemicals.)

‘Dow Deutschland Anlagengesellschaft mbh’ (Dow) has authorisation for the solvent’s continued supply through its Safechem Europe subsidiary (+49 211 4389-300) to companies that meet the authorisation’s equipment and operation parameters. The European Commission is yet to give its final seal of approval, but it has not yet gone against a European Chemical Agency (ECHA) ruling and the ECHA Committee for Risk Assessment (RAC) and its Committee for Socio-economic Analysis (SEAC) have issued their supportive “opinion on an application for authorisation for trichloroethylene” (http://is.gd/P1BrUi).

Those wanting to benefit from this authorisation via Dow must have undertaken, and documented, a thorough analysis of alternatives. They must also be using European Chlorinated Solvent Association (ECSA) Type IV machines (fully enclosed, no vent to air) or, if possible, Type V units (as IV, but with vacuum). Training for downstream users, as specified by the applicant (Dow) in the chemical safety report, is recommended by RAC. Monitoring arrangements are also recommended by both RAC and the SEAC.

The authorisation also says that the supplier of TCE must, between 30 months and 66 months after the sunset date, provide downstream users with obligatory training on alternative cleaning solutions and on the methodology for analysis of alternatives. Safechem Europe says that it has “committed to all of these requests, with services already in place for every customer”. However, TCE will be REACH-reviewed again in seven years’ time, so its reprieve is likely temporary.

All okay, then, for those using sealed systems and working as per the authorisation. But firms using TCE in enclosed systems are on the wrong side of the law. HSE documentation from February 2015 (http://is.gd/MUcnea) says: “... use of enclosed plant will not be permitted after the sunset date of 21 April 2016.” (Enclosed equipment ECSA recommendations: http://is.gd/gcBrJ8.)

If that’s a surprise to you, then your next nearest option is to switch to a solvent that can be used in the enclosed equipment that you have, because going for Type IV or V equipment is going to cost £100,000+, suggests UK firm Enviro Tech’s marketing manager, Syd Treacher, although informed sources tell Machinery that smaller units can be had for half that price.

Enviro Tech (0208 281 6370) has been offering an enclosed system TCE alternative for 20 years or so; EnSolv, a stabilised n-propyl bromide (nPB) solvent. This, says Treacher, is a “drop-in replacement” for TCE; “resetting the thermostats is all that’s necessary”. That it hasn’t been snapped up prior to the sunset date is because it is up to five times the price of TCE, he offers. Still, the company is undertaking a promotional campaign and is seeing a good response, according to Treacher.

However, nPB is on REACH’s Substance of Very High Concern (SVHC) list and is believed, but not confirmed, to be heading for REACH Annex XIV inclusion this year, meaning it will be banned, although Treacher stresses it will likely be four years before any prohibition comes into force. That said, Enviro Tech comprehensively challenges the various safe exposure limit figures (HSE does not specifically list one for nPB, but advisory bodies elsewhere do) and also explains EnSolv’s lower risk classification than nPB in FAQs on its website (http://is.gd/ojEPUx). Adding credence to Enviro Tech’s challenge is HSE’s comment that: “There is a vast range of proprietary mixtures containing these [nPBs] and other solvents.” Nevertheless, EnSolv is officially caught in the REACH nPB net.

But as to replacing TCE with an nPB, Safechem Europe’s sales manager UK, Richard Starkey, strongly advises against it. Safechem Europe’s official statement backs him. It says: “The main criteria [for replacement] is that a suitable alternative should result in an overall reduction of risk to human health and the environment compared to TRI [TRE]. This negates the opportunity to substitute the substance by another SVHC,like nPB.”

NOT SO BLACK AND WHITE

But there is no explicit ban, just strong encouragement that supports the Safechem Europe statement. The HSE says: “If solvent degreasing is necessary and you are using a known or suspected carcinogen and/or mutagen, such as trichloroethylene, perchloroethylene, methylene chloride or nPB, you should substitute it with a less hazardous solvent (or mixture) (eg modified alcohols), if possible.” (See http://is.gd/MUcnea).

In referring to the UK hazadous substances regulation, HSE says: “COSHH requires all employers to assess the risks to employees’ health created by work with hazardous substances, and identify the necessary controls.” (See http://is.gd/wqYZxT.) And ECHA echoes that at EU level, saying: “The EU Workers’ protection legislation also places obligations on employers. Where possible, employers should replace hazardous chemicals with chemicals or processes which are less – or not at all – hazardous.”

Says Starkey: “It is very questionable that a different SVHC is reducing the risk of another SVHC, and especially if you take into consideration the type of technology and risk management. For example, delivery in drums versus something like our Safe-Tainer system.” Safe-Tainer eliminates fume escape to atmosphere during delivery and transfer.

Safechem Europe says it has a safer TRE replacement than nPB for enclosed systems, its Mecthene MC solution, a stabilised methylene chloride, which is supplied via its Safe-Tainer system, just as for TRE. It is not a drop-in replacement, though, so equipment modification or new kit will be necessary.

But since Enviro Tech challenges the nPB-related generic statements for its EnSolv, competing statements here are comparing apples with pears. When supplying a package of equipment and solvent, Enviro Tech recommends technology made by CC Hydrosonics (01279 418942). To date, Enviro Tech has supplied 100+ systems in the UK, but EnSolv is used by many other companies, Treacher adds. (EnSolv can be employed in sealed systems, too – http://is.gd/WD5BN0.)

Moving on, hydrofluoroethers (HFEs) are another safer-then-TRE option. Again more expensive per unit volume than TRE, 3M’s Novec Engineered Fluid 72DE is an example (http://is.gd/bJkdrt). Says Alexej Dens, 3M technical sales manager: “This is not subject to phase-down or phase-out legislative restrictions, has zero ozone depletion, a global warming potential (GWP) of 40, is not classed as CMR [carcinogenic, mutagenic or toxic for reproduction], nor does it require extraction, acid acceptance testing or maintenance of stabilisers, unlike Trike [TRE].” Novec 72DE is one of a family of HFEs from 3M. Again, it is not a TRE drop-in replacement, however.

But HFEs are not without negative comment. Crudely put, they are transdichloroethylene (trans DCE, a chlorinated hydrocarbon) wrapped up in a suppressant to negate explosion, as the former has a flashpoint of 2 °C. Safechem Europe’s Starkey says that HFEs present corrosion issues (as he says nPBs do), which he can instance (see box, below), and he adds: “Just like any other halogenated solvent, trans DCE can break down [ratios of various elements change], while acid cannot be excluded from any cleaning application, solvent- or water-based. The key is how you manage this acidity.” But he accepts that acidity is less of a problem for enclosed systems, due to regular topping up.

But of Novec 72DE, 3M says it has “constant vapour and liquid composition at its boiling point”. In addition, the 3M data sheet for its HFE offerings says: “In the 15+ year history of these blends [Novec azeotropes of hydrofluoroethers with trans DCE], there is no evidence of vapour degreasers ‘going acid.’” And it further adds: “The trans DCE azeotropes [a constant boiling mixture of two or more liquids whose proportions cannot be altered by simple distillation] have successfully replaced chlorinated, brominated and hydrocarbon solvents, as well as aqueous cleaning systems, in industrial, military, aerospace, medical, optics and electronics markets.

“These azeotropes are effective cleaning solvents for cutting oils...have shown excellent compatibility with most substrates in these industries...cleaning performance is equal to solvents such as TCE, nPB and MeCl [methylene chloride].”

So that’s it? Not quite. Let me introduce Hydrofluoro-olefins (HFOs), in the form of Honeywell’s Solstice PF (www.honeywell-solvents.com) and available from Banner Chemicals (01928 597000; Banner also supplies EnSolv). Basically, on both grounds of safety and cleaning capability, it trumps other enclosed system TCE alternatives, Alberto Malerba, UOP customer marketing manager for LGWP aerosols and solvent fluorine products EMEAI, told Machinery at the recent MACH 2016 exhibition (UOP is based in Italy and is a Honeywell company).

Solstice PF is described as: “Non-flammable, has a global warming potential (GWP) of 1, and an occupational exposure limit (OEL) of 800 ppm...It is also VOC-exempt [does not deplete the ozone layer as do TRE and methylene chloride], as determined by the USA’s Environmental Protection Agency (EPA), and is listed under its Significant New Alternatives Policy [http://is.gd/orG16J].

“From precision aerospace engine parts to components with small blind holes (p25), Solstice PF is proven to clean as well as the solvents you use today,” the company says. Many current examples are in Honeywell facilities, Malerbo told Machinery. Another HFO is Vertrel Sion from DuPont (Fraser Technologies, 01506 443058): GWP<15, 201 ppm, VOC-exempt.

Safechem Europe’s Starkey levels the same concerns at HFOs as he does for HFEs, however, and seemingly in a nod here, the Vertrel Sion data sheet says at certain air-vapour ratios a flammable mix results.

For Solstice PF there’s this: “This material can ignite when mixed with air under pressure and exposed to strong ignition sources”. And, of course, HFOs are again more expensive than TCE per unit volume. But there are options for continued solvent-based degreasing in enclosed systems. 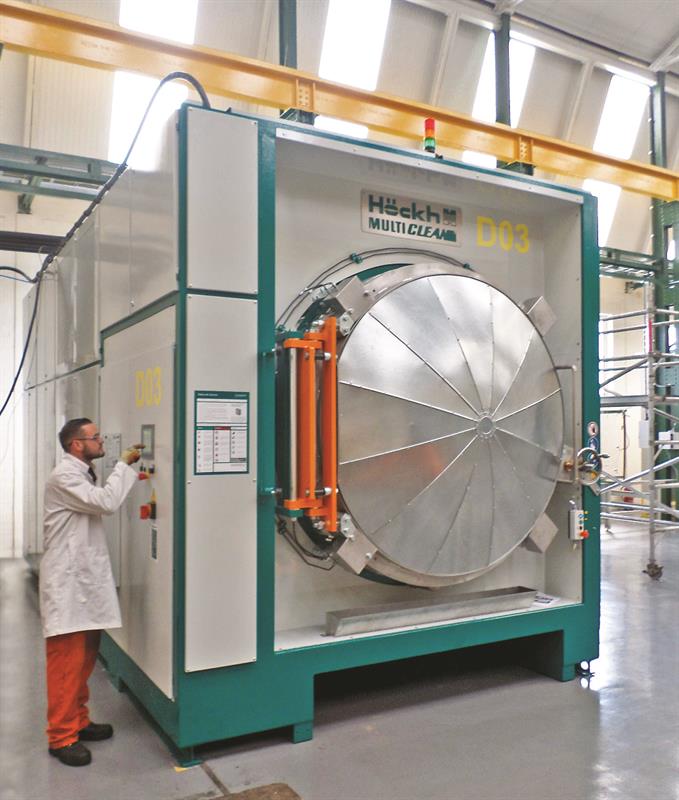 This fully enclosed unit employs perchloroethylene, which is not an SVHC, so is not heading for a ban

Last year, heat treatment specialist Wallwork installed spray/vapour solvent cleaning equipment from Hoeckh (IB Industries, 01204 410585) for the cleaning of ferrous and non-ferrous components prior to thermal processing at its Birmingham facility. Certification of the process to AS9100 is in line with other approved processes on the site and makes it fully compliant with that European aerospace quality standard.

“Thorough cleaning is essential to achieving heat treatment goals. However, traditional processes such as the use of trichloroethylene, aqueous cleaning and tumbling all have drawbacks. The newly installed Hoeckh washer uses perchloroethylene [PER], a solvent commonly used by dry cleaners [and not an SVHC], for effective cleaning on a closed process where solvent is recovered and reused,” explains business development manager Mark Ferguson. (Dow/Safechem registered PER for different applications, including use in dry and surface cleaning, as required by REACH.)

Elsewhere, HS Marston Aerospace had been a user of TCE in open top tanks.

As health, safety and environment legislation tightened, it first considered water-based solutions, but staining and insufficient drying were issues. Next up were solvents for use in enclosed systems, with an nPB-based answer considered, but this had problems with stability that saw a build up of acidity. The company then moved to an HFC (hydrofluorocarbon), but could not obtain adequate cleaning, saw part delivery times extend, while annual solvent spend was high. The answer was Dowclene, a modified alcohol solvent, supplied by Safechem Europe, used in a new sealed system.

This article was originally published in the May 2016 issue of Machinery magazine.

Make it a date

Trichloroethylene - the end of an era? Looks like it, says Geiss UK