Me and my robot: integrating a new generation of collaborative robots, or cobots

No more are industrial robots restricted to endlessly carrying out a fixed routine, driven by a prewritten program. A new type of small, inexpensive and easily configurable robot arm is promising to change the rules of factory automation. Will Dalrymple investigates

Known as collaborative robots – cobots for short – this new generation of machines can work unguarded, unlike traditional robots, and is even free to carry out tasks around people, because their manufacturers have designed out such physical hazards as pinch and shear points. Cobots’ joints feature force-sensing systems that detect collisions in a fraction of a second to stop motion.

Perhaps cobots’ most important feature is their pendant or tablet computer user interface that enables programming on the shopfloor by staff that have little or no robot programming expertise. Movements are not ‘programmed’, but ‘taught’: users need only press some arrows on a touchscreen control or grab hold of the end of the robot and manually guide it to the starting and ending positions required for a pick-and-place operation, for example. The robot controller takes care of the rest. Tasks can be saved and later edited.

And that’s not all. Of the elements that make up cobots, German equipment manufacturer Schunk (01908 611127) says: “Human-robot cooperation in close quarters requires intelligent sensor technology, safe and reliable control and software, as well as failsafe communication.” It further qualifies this by saying that, in addition to collision detection, onboard cobot sensors can include vision systems that help orient the robot in a new environment, or that read barcodes or help a robot choose which item to pick, without having to rely on programmed – or taught – positions. Force feedback available on some robots and in some grippers can support fastening parts in an assembly operation or guiding placement of a component in a jig. And most offer spatial accuracy sufficient for these tasks, repeating to about 0.1 mm. 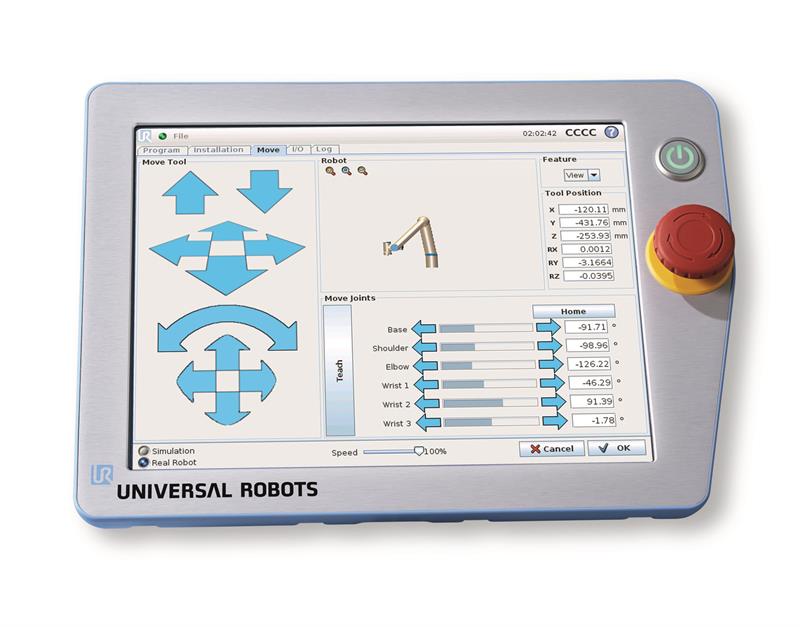 Universal Robots' control pendant interface makes it easy to 'teach' the robot arm movements, either by pressing jog buttons on the tablet or by pressing a button behind the control and manually dragging the robot arm into position

Although cobots are modular, with different options available, they tend to be specified and sold to end-users as would be a desktop computer, as a complete package: robot arm with force feedback, smartphone-style interface, sensors, with a computer as the coordinating and unifying brain.

Kuka (0121 505 9970) points out that its Sunrise controller for its IIWA cobot unites safety, robot, logic and system control. Because control software is preinstalled and preconfigured to adapt the robot to perform a multitude of tasks, there are little or no integration costs – in fact, integrators need not even be involved – unlike for traditional robots.

Low costs enable vendors to make some remarkable claims about the robots’ quick payback time, compared to manual work. Pat Fenn, director of Cobotix, which is associated with Haas Automation in the UK, says that the cost to the company of two full-time machinists each working a single eight-hour shift on the new living wage (£7.20/hr), including national insurance and pension contributions, would reach nearly £40,000. But since the robot can work 24/7, “it’s easy to see payback is not a lot more than a year”, he points out.

The purpose of collaborative robots is not to replace people but to upskill them, contends Peter Williamson, managing director of RAR UK Automation UK, the new company spun off from bearings’ supplier RA Rodriguez specifically to focus on the sales of Denmark’s Universal Robots units that it has offered for several years (it is now a preferred supplier). He proposes that with the purchase of four cobots, one operator would be able to perform the job of four operators each managing one CNC machining centre. Such an arrangement would not only provide a new role for the operator to manage the robots as well as the machines, but also increase production by allowing redeployment of the other three employees to other areas of the business. 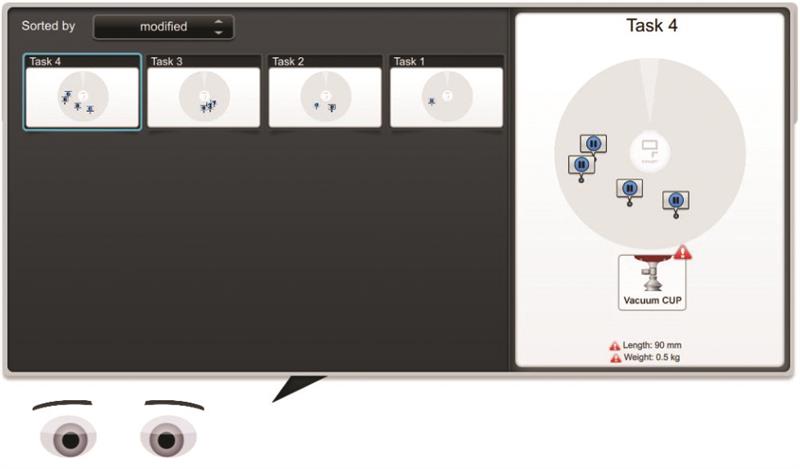 Cobots’ small size means that they can be lifted by hand, and their simple software makes them easy to reprogram. So a big selling point of cobots is that they are flexible enough to be moved around a factory on an ad-hoc basis, performing multiple jobs based on programs that are either taught in situ, or pulled from memory. Two cobot models (from Cobotix and Kuka) are even mounted on mobile pedestals with retractable wheels for portability.

While cobots seem ideal for such work, there is an additional safety complication. UK law requires that every cobot installation (meaning robot plus surrounding working environment) be risk-assessed, to make sure that it is safe. That involves identifying the hazards, considering how employees might be harmed evaluating the risks; doing what is “reasonably practicable” to protect people from harm (www.hse.gov.uk/risk). For example, not all cobot installations will be safe enough to be completely free of guarding: Universal Robots states that 20% of applications would still require guarding.

International technical codes and standards frame robot safety requirements. Robot safety is covered by ISO 10218-1 and -2:2011. Part 1 is robot design, so the manufacturers are responsible for satisfying it. Part 2, robot systems and integration, is down to the company responsible for setting up the robot that, in most cases for cobots anyway, will be the end user.

Colin Dullaghan, product manager for the collaborative assembly robot YuMi from ABB (01908 350 300), points out that the cobot is only part of the whole picture.

A new addition of particular relevance to cobots is the technical specification ISO/TS 15066:2016, published in February. This describes different collaborative robot concepts and offers requirements to achieve those.

It also offers research data on pain thresholds linked to robot speed, pressure and impact for body parts: these can be used to create operational parameters for the robot. If its speeds and forces are shown to be below the pain threshold, they cannot be assumed to cause injury.

Says Carole Franklin, secretary of ISO/TC 299/WG 3, the group that wrote the standard: “Up until now, robot system suppliers and integrators only had general information about requirements for collaborative systems. ISO/TS 15066 is therefore a game changer for the industry. It gives specific, data-driven safety guidance needed to evaluate and control risks.”

Gripper technology deserves a few words. Traditional industrial robots are usually supplied as standard kits, with the expectation that the end tooling will be custom-developed around the load. This is of course possible for cobots too – most offer removable ‘end effectors’ – but since they are sold to be able to carry out many different tasks, the cost of engineering bespoke tooling for every single application could prove prohibitively expensive.

Instead, many vendors have formed relationships with gripper providers. RAR UK Automation sells, and integrates with its cobots, the Robotiq brand of grippers in the UK and Ireland; likewise Cobotix and Kuka also supply grippers from other suppliers. Kuka also integrates standard grippers from Staubli (01952 604984) and Schunk (in addition to its gripper range, Schunk also launched a force-controlled version of its own Powerball Lightweight Arm LWA 4P at the Hanover show in Germany last month). Other common examples of handling equipment used on cobots include vacuum cups (powered by compressed air), electromagnets, fluid dispensers and screwdriver heads (some cobot versions offer unlimited rotation at the wrist).

These attachments help the robot do all kinds of factory tasks. Many, such as ABB’s twin-arm YuMi robot, are intended mainly for assembly tasks and workbench-type activities. Other applications include order fulfilment and packaging – in fact RAR UK demonstrated just such a solution at the Drives & Controls exhibition in Birmingham in April.

As befits this kind of work, cobots have tended to be small in size and payloads limited to about 10 kg (see table below; an exception is Fanuc’s 35 CR 1a cobot, whose 35 kg payload is three times that of others).

He explains: “The operator does the clever bit, the thinking, putting things into position with its gripper – a hand – and the robot completes the final assembly and torqueing up the bolts.”

Jeremy Hadall, chief technologist, digital engineering, at the Manufacturing Technology Centre (MTC) argues that a sweet spot exists for deploying cobots (this is a focus of ongoing MTC research). He states: “If your machine tooling is taking the same part in and out of a machine in a high-volume, low-mix scenario, using a collaborative robot, I’d argue, is not the best. It would be better, cheaper and easier to implement an industrial robot, as you have done for many years. If it is a high-mix, low-volume environment, it might be better to use Cobots. But the decision is not necessarily straightforward. It is not a case of simply saying that a robot is better than a human, either. You have to really understand the individual application and what you are trying to achieve.” (On 26 May, the MTC is hosting informative seminars about automation: www.machinery.co.uk/117253).

Williamson at RAR UK Automation says that machine tending is one of the main application areas of the Universal Robot cobots, which offer a load capacity of up to 10 kg (although that includes end tooling, such as the gripper). He argues that this capacity covers a huge range of machining operations. 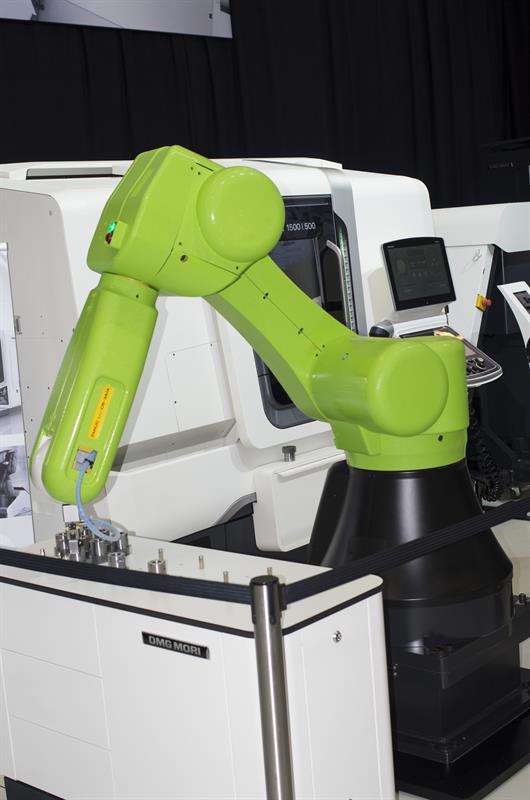 Fanuc's robot, shown at DMG Mori's open house in Pfronten, Germany, in January, is covered in soft green foam to reduce the risk of injury

But others have acknowledged that these relatively small robots might not be sufficient for everyone. For example, Burns admits that cobots’ small payloads can limit their potential market (even though Kuka’s IIWA manages 14 kg, better than most), but adds that R&D continues. He says: “The eventual aim, in my view, is that these capabilities will be cascaded to larger robots; that’s being worked on by us and other robot suppliers.”

Most of the vendors contacted for this article say that UK customers remain hesitant to buy. Chris Burton from Geku Automation (01634 715271), which also sells Universal Robots, says: “Uptake has been good but, as with any new technology, there’s been an initial scepticism. But as they become more well-known, we are hoping that numbers will continue to increase, as has already happened in Europe and America; the UK seems a little behind.” This article was originally published in the May 2016 issue of Machinery magazine.