Following on from new machine interfaces (see feature 'A brave new face'), we take a more detailed look at developments in the controls behind them. New machine controls are not just faster, they incorporate software that improves milling performance elsewhere, reports Will Dalrymple

No matter how great the skill of the operator, the process of machining cannot avoid causing imperfections in the workpiece: even very rigid machines vibrate slightly in response to a stop or sudden turn, and the effects of even those small movements can be visible in cut metal. By the same token, the speed at which some operations can be carried out, such as simultaneous 5-axis work, or high speed roughing, is limited by the control, whose processing power is not infinite.

Control vendors are coming to the rescue with new software and hardware (much of it as optional extras) that aims to improve cutting performance and workpiece finish, generally without operator action. These features are often referred to as 'intelligent': 'intelligent machining' for Heidenhain; 'intelligent technology' for Okuma. New features promise benefits in machining speed, in reducing chatter and vibration to smoothen surface finishes, preventing collisions and improving a machine's simulation capabilities.

In raising machining speeds, some of these technologies are like cruise control in a car: they enable extra control with less effort. For example, with the new Heidenhain (01444 247711) TNC 640 control for millturn and milling machines, operators can set an optimal spindle power for a given tool and the machine will vary feed rate to compensate. Since the spindle power required at the cutting edge depends on the depth of cut and the sharpness of the tool, the control will automatically speed up the spindle feed in shallow cut areas and when tools are blunted. Maximum speed for this feature is set during a teaching cut, during which the operator also sets speed parameters; below the minimum speed the machine stops and signals an error. Since machine feed increases in all but the worst-case situation, this control feature has 'enormous' cycle time advantages, particularly when working in areas with varying cutting depths, such as roughing out castings, or in intermittent cutting environments, according to Heidenhein (GB) managing director Neil Prescott. Heidenhain controls are found on various machine brands, including Hermle (Geo Kingsbury, 023 9258 0371) and DMG Mori (0247 651 6120). 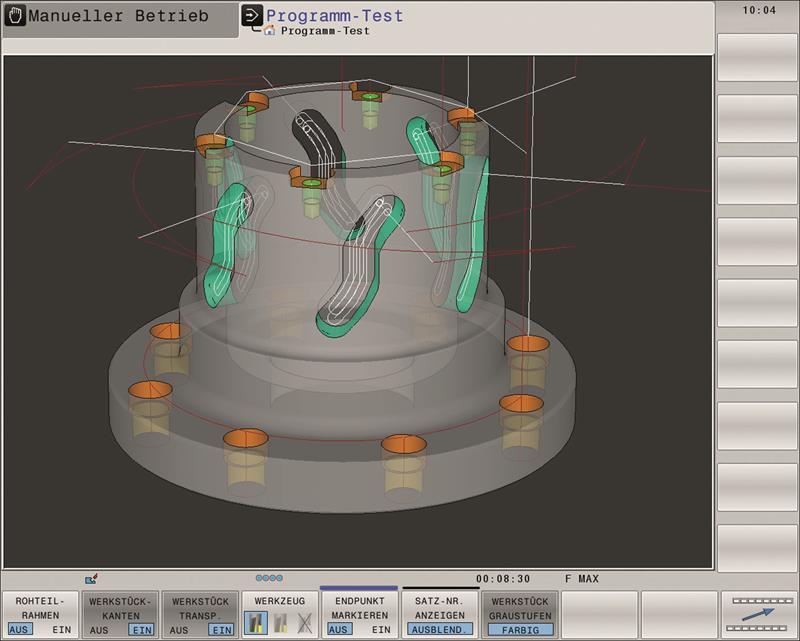 This Heidenhain capability, called Adaptive Feed Control, has faster response times than alternative external add-on systems, he adds. It can also help new machinists work as effectively as more experienced colleagues. "Heidenhain controls have always allowed the programmer to enter a manual compensation through the [feed] override potentiometer to adjust for the actual machining situation. But this always depends on the experience and, of course, the presence of the operator," the company says.

ADVANCED TECHNIQUES
Another beneficial cutting technique is trochoidal milling, in which the spindle not only has a linear feed, but also a circular motion as it cuts a slot. The major advantage of this technique is that it only takes off a thin amount of material per circular plunge, so an axially deeper cut can be made. This approach is more efficient, creates better chip-breaking and reduces tool and machine wear. CADCAM software such as PowerMill from Delcam (0121 766 5544) has offered trochoidal milling toolpaths for some time and now Heidenhain's TNC 640 control includes it as an option. Both systems can be enhanced by Adaptive Feed Control to reduce cycle times. 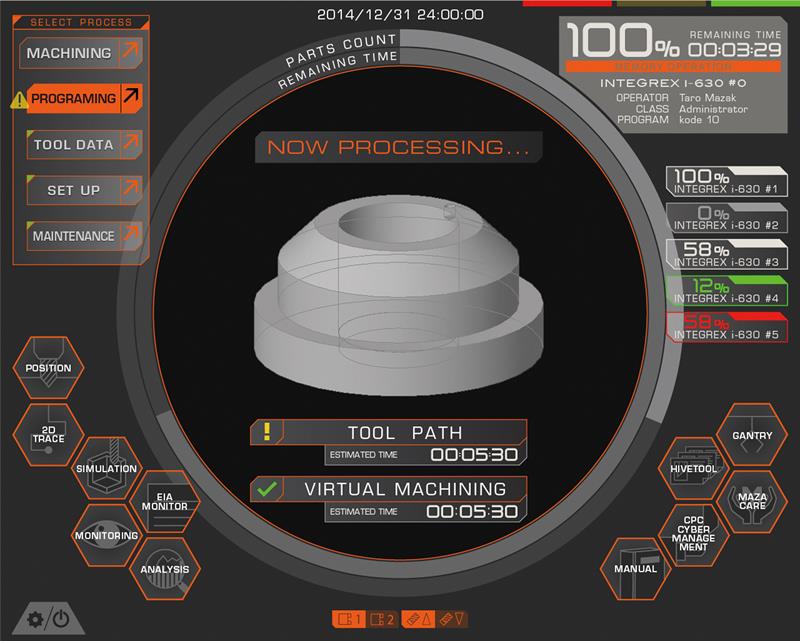 Faster machine movements are also a benefit of Mazak's (01905 755 755) new SmoothX control. Five-axis machines' linear axes generally have faster acceleration rates than rotary axes, points out Mazak product manager Mark Hall. This means that spindle acceleration in simultaneous 5-axis contouring has been limited by that of the slower rotary axes. Armed with this knowledge, the Mazak controller now allows multiple acceleration values, depending on the axes involved. Although rotary axes won't speed up any quicker than they did before, linear axes will, courtesy of Variable Acceleration Control, so the machine can, in effect, traverse more quickly.

It can corner better too. As any car driver will know, a moving body needs to slow down before going around a corner to hold a line. With its new Smooth Corner Control, the Mazak SmoothX controller adds a specific extra radius to corners to reduce the amount of deceleration during machining, helping maintain feed rates, and also reducing machine vibration that might show up on the workpiece.

Further help increasing speed comes from the Advanced Surface feature in the Sinumerik control from Siemens (08458 507600). This improves the performance of high speed machining where the limiting factor is not the machining process but the CNC control. Its algorithms speed up processing of challenging shapes, such as freeform surfaces, using techniques such as look ahead and dynamic compression of linear and circular blocks using a spline interpolation technique called non-uniform rational B-spline (NURBS).

In addition to working in the background improving performance, latest controls offer tools to help users create metalcutting programs. Some highlights include:

DEALING WITH CHATTERING TOOLS
A major source of workpiece flaws is tool chatter, which can persist, or even worsen, as speeds and feeds increase. Particularly evident in high speed machining operations such as roughing because of the large forces involved, tool chatter results in groove marks on the workpiece that have to be removed through labour-intensive manual finishing. Its vibrations can also wear the tool and the machine. The standard remedy for chatter is to reduce the metal removal rate, or to change the tool.

As spindle vibration is a main indicator of chatter, it is no wonder that spindle vibration is shown on at least one control maker's machine status screen on new control interfaces (CELOS). The Heidenhain TNC 640 control goes one better to monitor the onset of chatter. It automatically changes the machine's damping characteristics to reduce chatter so, it is claimed, it can drive as fast, or faster, than before.

Another anti-chatter system is featured on the latest P300 control from Okuma (NCMT, 024 7651 6600). Machining Navi detects chatter with additional sensors and either recommends changes to spindle speeds (Machining Navi L-g and M-g), or automatically adjusts speeds (M-i). A real-time chart on the control shows tool vibration and optimal speeds; instances of chatter can also be recorded for later analysis.

Vibrations and other machine movements that could lead to inaccuracies are compensated by several new features in the Heidenhain 640 control and are collected under the title of Dynamic Precision. Various programs counter low-frequency vibrations that are caused by a change in direction, the slight flexing of a portal-type machining centre's bridge's legs when it stops, the spindle nodding at the end of a pocket because of a change of direction, flexing within the machine when there are overhangs, and flexing in the machine when there is a load on the table. And to prevent minor jerks in the head that spoil a smooth surface, the Advanced Dynamic Prediction feature looks for clumps of points on a freeform surface that have been generated by a CADCAM system. It intelligently chooses to ignore some of them to enhance feedrate consistency, and, in so doing, surface finish.

AVOIDING BUMPS
Although programs written at a machine can be simulated on the same machine, and while G-code programs can be tested for collisions using offline software such as Vericut from CGTech (01273 773538), collisions still happen. Okuma says: "As machines become more complex, involving additional axes, automation and set-up changing, there's more room for human error. Many applications and development tools concentrate on the cutting and forget about the hazard of collision." The Okuma P300 control's Collision Avoidance System guards against the risk of clashes by generating a 3D image of the actual materials shape and running it in a cut simulation a fraction of a second before the cut happens. It protects the machine during automatic and manual (jogging) modes.

Similarly, the Dynamic Collision Monitoring function on the Heidenhain TNC 640 runs a simulation of the cut, including a model of all the machine components located within the work envelope (including the tool), in real time, for both automatic and manual modes. If a potential collision is detected, the system ramps down the machine to a stop and highlights the relevant parts on the screen. In fact, it has a two-stage warning: the first, at about 10 mm, stops the machine and warns the operator, but still allows manual jogging towards the collision – up to a second and absolute limit, 1 mm from the obstruction.

When there is a collision, it is often rotating tilting tables used in 5-axis milling machines that are on the receiving end, but even everyday wear and tear can throw off their kinematics and bring them out of level. Poor calibration of the table could affect machining quality. Several controls now offer an automated probing cycle that takes measurements from a datum sphere and then automatically adjusts the machine's kinematics. Okuma's system is called 5-axis Auto-Tuning; the Heidenhain system is called KinematicsOpt.

In control of operations