From the files - The art of prediction (first published in Machinery, April 2018)

​A global automotive group that has 24 manufacturing plants and 13,500 employees is connecting equipment within its plants globally. Andrew Allcock reports, explaining the end game of predictable quality levels and performance, leading to the avoidance of assembled product testing

Nexteer is a $3.8 billion automotive steering and driveline systems supplier owned by China’s Pacific Century Motors and is headquartered in Auburn Hills, Michigan, United States. That US site was once a well-known GM steering gear plant – Saginaw Steering Gear Division – but became Nexteer in 2009, following GM’s acquisition of Delphi Steering in that same year; Nexteer was then purchased by Pacific Century Motors in 2010. So, the name may not be familiar, but it has deep roots that hail from its 1906 establishment as Jackson, Wilcox and Church, prior to its GM absorption a few years later.

Nexteer (www.nexteer.com) has 50+ customers, including BMW, FCA, Ford, GM, Toyota, PSA Peugeot-Citroen and VW, as well as automakers in India, China and South America. And while its products today include more electric, electronic and software technology than its forbears of just a few years ago, mechanical component production remains a core activity. Parts manufactured around the world variously take in: columns; half-shafts; prop-shaft joints; intermediate shafts; integral gears; rack-assisted electric power steering; column-assisted electric power steering; pumps; rack and pinion gears; and reservoirs. Many of the same products are made at multiple sites.

At this January’s North American International Auto Show in Detroit, Nexteer announced its ‘Digital Trace Manufacturing’ strategy, describing it as “a holistic approach to integrating manufacturing and design”. The company said that, for customers, this will help deliver high quality product performance, while boosting value and global capacity optimisation across all of its 24 manufacturing locations worldwide.

Says Dennis Hoeg, vice president and North America chief operating officer: “To enable Digital Trace Manufacturing, we’re using a connect-the-dots approach, in which the thousands of data-producing dots around the world are standardised and talk to one another. Each dot represents a machine, process, database, document, workplace robot and so on. When the dots are connected, the result is one common, global architecture. Digital Trace Manufacturing allows Nexteer to deliver a dynamic, comprehensive view of its manufacturing operations in real time, which is a big pay-off for our customers, employees and shareholders.”

Ultimately, Digital Trace Manufacturing gives Nexteer a more intimate understanding of its global operations at any given minute. Furthermore, any improvement in design or production made at one location can quickly be replicated globally, the company underlines.

According to Hoeg, the difference between what Nexteer is doing and what is commonly referred to in the industry as ‘digital thread’ or ‘manufacturing automation’ is the vastness of what Digital Trace Manufacturing is covering. Because of the scope and the level of integration, it will take several phases to fully implement the entire system, he explains. However, he says that he has already seen a positive impact on customer responsiveness and quality in the initial phases. “The results are priceless as we implement future phases, and we expect the benefits to grow even more. We are a technology leader, not only in what we do in advanced steering and driveline systems, but how we do it.” 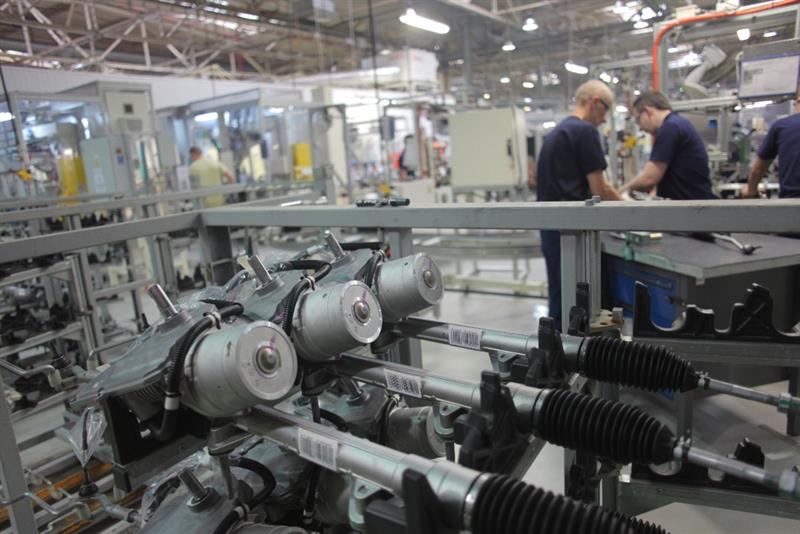 This journey started many years ago; January’s named strategy hasn’t just appeared. Hoeg spoke at the Siemens 2017 Digital Twin summit (https://is.gd/voqubi) and talked about both virtual manufacturing and virtual design, in fact. The company has been both a user of Siemens NX and Teamcentre PLM for “a long time”.

During the presentation, Hoeg outlines a manufacturing challenge and an example of what it is doing. “We have a product ‘A’ that is manufactured in five different locations globally. These things are very similar; similar machines, similar operations, similar tools, similar requirements. How do we make sure that we are optimising all of those, that they are at the best value and at the right requirement level, and that we are sharing lessons learned?” The answer is to capture and connect data, and he outlines the company’s approach.

Taking a specific performance improvement example, the following data points in a manufacturing process are cited: spindle vibration; coolant temperature; CMM measurement; heat treatment parameters; sub-assembly test results; noise test; and function test. One of the test parameters in a finished steering system assembly is friction. Says Hoeg: “There are a lot of things that go into creating that friction level before it gets to the end of the line. We need to connect, and we are starting to connect, with all of those operations that are important; trying to figure out which ones are important, connect the data from those. And this is where I strongly believe we can get to the point of predicting performance before testing for it.

If you can predict for it, now you don’t need to do the test for it, you can do something different. And you don’t have large system costs tied up at the final end where you are testing, you can take care of it [issues] at the component level or sub-system level.”

The company’s global IT director, Krzysztof Mekwinski, explains that there is a centralised manufacturing engineering set-up for the company, with similar parts manufactured around the globe employing similar machines, tooling and processes, although regional equipment availability variations mean that they may not be identical, but the same machine control is employed, if possible. Machine and process data have been collected and analysed locally for some 10 years, he reports, with a more standardised approach commencing globally some five years ago.

More simple, on-premise data gathering has supported comparison and initiatives already, but some data is now being “brought to the cloud” (Microsoft Azure/Power Business Intelligence plus its own custom analysis algorithms) to provide the more integrated and complete set-up that Digital Trace envisages. However, first the company needs to understand what data needs to be in the cloud and what sort of comparisons need to be made. “That is the business question that we need to ask; what will bring us the most benefit” Mekwinski says. “It is not about getting all the data we can collect and putting it into the cloud. It is about collecting the best data and analysing it.”

MOVING TO THE CLOUD

The company started looking at this cloud-based scenario a couple of years ago and is establishing what parameters need to be measured for the various operations, with machining and heat treatment mentioned specifically, and what patterns and correlations are linked to what outcomes,

he says. The target, he says, is very much being able to use the data in a predictive way, to know that parts that are being assembled are made to the relevant quality and performance level, without testing assemblies, and recognising what indicates a bad part and so prevent its assembly, as Hoeg stated in his presentation. This predictive capability is something that has already been achieved in pre-cloud days, Mekwinski offers, but Digital Trace clearly envisages the capture of more data, more analysis and more broad application globally in a standard fashion and in doing so “eliminate, as much as possible, all the testing operations”.

The power of data

Some examples of captured data include: using a heat map to visually identify high risk conveyor pallets in real time, allowing service personnel to proactively perform maintenance before an issue occurs; tracking and storing serial-number-specific data to measure performance along the manufacturing process; keeping a virtual ‘command centre’ to analyse the root causes of rejected parts and make quick, corrective actions; integrating databases that capture product information, so that complete analysis and swift problem-solving are possible; and implementing a manufacturing execution system (MES) that monitors and manages processes in real time across factory floors.