Based in Wrexham, £70 million turnover Magellan Aerospace was succeeding in its efforts to standardise machining processes for wing ribs, butt straps, thrust fittings, access panels and wing spars up to 20 m long as part of its continuous improvement policy. But a recurring drilling problem on lithium aluminium rib production was a harder nut to crack.

There are multiple variations of wing ribs that are milled from solid in 100 mm thick plate. These can have up to 150 bolt-down holes, some with counterbores of 14, 20 and 26 mm diameter by up to 70 mm deep. Such is production demand that the Wrexham site is producing up to 1,500 holes a month.

Previously not an issue, the change to lithium aluminium alloy on some of the aerostructure parts saw the drilling problem appear. This advanced aluminium alloy contains between 2 and 3% lithium copper magnesium alloying elements, creating a high strength-to-weight ratio with a lower density and an improved elastic modulus versus other aluminiums. While giving greater resistance to elements such as fatigue cracking, the material is far from tolerant to the process of drilling, especially on deeper ones.

Despite significant process changes and trials of different tools and suppliers, none could better 10 holes before either an insert change was required or total tool failure and breakage occurred. Even the use of solid carbide tools, which made a large dent in tooling budget, never came close to providing an acceptable solution.

The need to solve the tooling problem was a growing concern, as production schedules were increasing. And with some parts having machining cycles of more than 14 hours on the recently installed, high specification 120 kW, 30,000 rpm, 6 by 2 m pallet Dorries Scharmann DST Ecospeed F2060 fixed-column horizontal machining centre (Starrag UK, 0121 359 3637), maximum utilisation was important in supporting expected business growth. Indeed, the company has plans to boost its turnover to £85 million over the coming five years.

Sumitomo Electric Hardmetal's WDX drill, combined with the company’s DLC (diamond-like coated) inserts, immediately overcome the problems that had been seen with other drills, namely built-up edge causing immediate overheating, the welding of swarf in the drill flute and repeated seizure of tools in the hole being processed. Previous supplier trials involving different tool types and process changes, including solid carbide, pilot drilling, slot drilling and revised speeds and feeds, had always failed to overcome these issues.

Further, even with the use of air-oil MQL (minimum quantity lubrication), swarf control was very difficult with other drills, yet works efficiently as part of the new set-up.

Sumitomo’s Aurora DLC 1500 coated insert was originally developed for non-ferrous materials, presenting high hardness and a lubricated cutting surface that creates a low co-efficient of friction of between 0.05 and 0.2. As Magellan engineers have found, this high efficiency coating suppresses built-up edge formation and allows good chip control. As a result, a consistent penetration rate can be maintained, while in-cut tool life is extended, along with process reliability.

Says John McGrail, project engineering manager: “The initial trial using a 26 mm diameter WDX drill produced 200 holes, with no apparent wear showing on the insert. Chip formation was excellent, without having to result to a pecking action, and we were then able to increase speeds and feeds to run the tools 25% faster. On certain holes that have deep 20 mm diameter counterbores, we are now running 60% faster than before.”

Now proven in production, the company is achieving insert cutting life of 50 mins per edge on the Ecospeed machine. As result of the drills having four cutting edges, inserts are now programmed to be changed after 200 mins. Now, as part of the company’s drive towards standardisation of processes and improved tool inventory control, Sumitomo’s SumiDrill WDX and insert solution is planned to be progressively introduced more widely across aerostructure components using standard aluminiums. 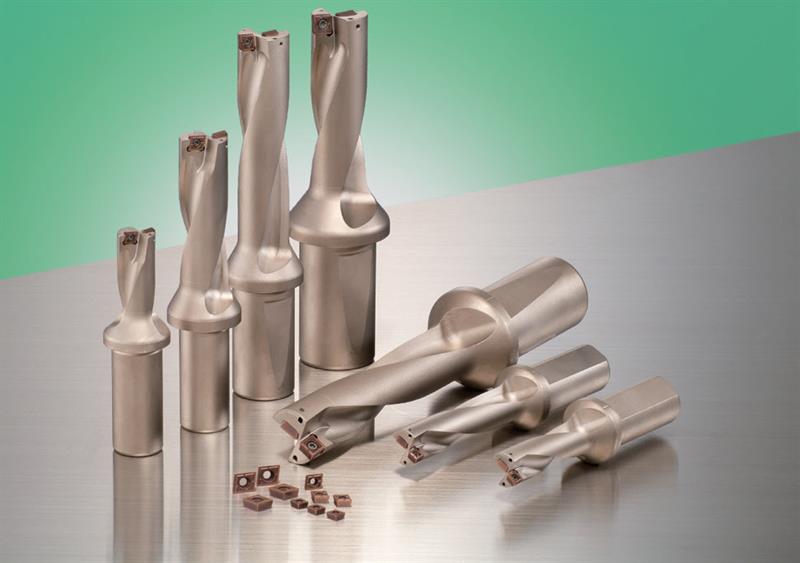 SumiDrill WDX is being applied more broadly by Magellan Aerospace

Underlining the importance of being able to solve this drilling problem, Adrian Young, operations manager, Wrexham, says: “The ability to produce large complex aerospace components for Airbus has enabled our operation to grow from £20 million in 2004 to £70 million this year.” The site employs 400 people and is investing some £4 million a year in new equipment that should take the business to a turnover of some £85 million within the next five years and Young concludes: “This means that machine utilisation is critical to help control capital expenditure, and solutions such as the Sumitomo drilling application are important in achieving our objective.”

The SumiDrill WDX high feed rate drill body boasts an adjacent insert design having inner and outer cutting edges that provides for a balanced cut, allowing the tool to drill from solid on a plain surface requiring no centring. In fact, it is so rigid and stable that the drill body can even be used to, in effect, mill an outside diameter, drill with half the wall of a hole exposed and be started on an inclined slant surface or in a pre-drilled hole. Diameter-to-depth ratios can be up to 5xD, due to the insert positioning, and the design of the tool enables the creation of an almost flat-bottomed blind hole, ideal for counterboring applications.LUMINIUM LITHIUM ALLOYS

According to www.smithshp.com, aluminium lithium alloys are a range of advanced aluminium alloys that usually contain around 2-3% lithium, along with copper and magnesium alloying elements.

These properties make aluminium lithium particularly suitable to any application where weight-to-strength ratio is critical and fatigue cracking is a concern. Aerospace and motorsport are typical application areas, as well as space exploration where these alloys have been extensively used.

High strengths can be achieved in lithium alloys through precipitation heat treatments that are similar in nature to those used in more standard alloys. However, these processes, along with many other aspects of this group of alloys, continue to be developed and improved.