Cloud-connected tooling data has been with us for about three years. Machinery reviewed developments as they appeared, but looks again at this area as yet another initiative is announced. Andrew Allcock journeys through the landscape, making sense of it all

CADCAM systems have tool libraries, but they need to be filled with data, including geometry, cutting data and solid models, if information is to be seamlessly called during NC programming. This has required the physical search for tooling information via hard copy or online, the keying of data into such a tool library, plus the creation locally or the import of downloadable solid models.

Attention has turned, therefore, to making the creation and maintenance of such tool libraries easier and more direct, avoiding manual keying of data.

In 2013, tooling specialist Sandvik Coromant was heralding ISO 13399 as “the next big thing” (see www.machinery.co.uk/49344). ISO 13399 standardised the description of cutting tools’ physical attributes that would, potentially, allow harmonisation of all tooling suppliers’ physical product descriptions. Such commonly structured tooling data from multiple tooling vendors could be employed in CADCAM tool libraries directly, Machinery was told. There was a subsequent tie-up between Sandvik Coromant and Siemens PLM to make this happen, with Iscar and Kennametal also involved (Siemens PLM video – http://is.gd/qrDaS6). This effort centred around importing data into Siemens PLM’s Teamcenter MRL (manufacturing resource library), a data and process management application that manages tooling components and assemblies.

Sandvik Coromant then launched its ISO 13399-compliant Adveon software tool data product (video – http://is.gd/M0LgJd) for integration within CADCAM systems, with Edgecam integrating it in 2014. TopSolid and GibbsCAM (video – http://is.gd/003rSz) followed suit, and Mastercam announced it would do so at the end of last year, while Delcam and DMG Mori are described as ‘official partners’.

Initially catering to milling tools, turning and boring tools are imminent for Adveon. As far as Machinery understands, although any manufacturer’s ISO 13399-compliant tool data can be managed with Adveon, no other tool vendors are supporting it.

Adveon can be used both online and offline, so local downloaded data can be interrogated. The main benefit promoted by CADCAM firms seems to be fast availability of accurate tool geometry and solid models.

Said CAM expert Joe Sanders of M2 Technologies following a ‘Discover more with Mazak and Edgecam’ event in the USA: “This [Adveon connection] creates a tool record in the Edgecam ToolStore database, complete with parametric definition and graphics of the tool and holder. These two taks have typically been tedious and time-consuming. Customers tell us the entire process often takes half an hour or longer, even for highly trained users. But with Adveon and Edgecam, the user quickly selects suitable tooling and immediately uses the tool assembly for accurate toolpath creation and simulation – in minutes.”

On Adveon’s apparent slow take-up by CADCAM companies, Sandvik Coromant’s Anna-Karin Larsson, senior project manager, intelligent manufacturing/Adveon, seems to offer a reason. She said of Adveon last year: “Our existing system requires considerable installation time for each new [CADCAM] partner, and that is a limitation. To solve this issue, we are running a development programme that will make each new integration a lot easier. This will open up [the potential] for a larger number of partners, and even small CAM partners will have the chance to integrate it into their offering.”

Of its slow adoption by users, Pernilla Lindberg, global service manager, Adveon, last year said this: “The industry is actually quite traditional and slow moving, but things are happening quickly now. Just a few years ago, digital catalogues were unheard of. Today, customers are requiring them from their tool suppliers, which indicates a new way of working. Still, the need for offline functionality is significant. Some companies work offline because they aren’t digitalised yet, while others choose to work offline to avoid viruses in their systems. For that reason, Adveon works both on- and offline, and so will CoroGuide.” (CoroGuide is the company’s tooling selection application that also includes cutting data.)

This web-based system can be accessed on PCs and tablets, but direct integration with CAM systems requires an interface – Esprit, TopSolid, Mastercam and Vericut, for example, have these. (Esprit author DP Technology holds all the share capital of MachiningCloud, incidentally.)

Without a CAM interface, it’s back to keying data in, but there’s still a benefit. Says Chuck Matthews, cloud evangelist at MachiningCloud: “Very few shops use only one brand of tooling and, as a result, using manufacturers’ websites and paper catalogues is very time consuming. This is where the benefit of MachiningCloud is first seen, allowing the customer to look at multiple vendors’ tools in one place, choose their tooling, build their assemblies and obtain the manufacturers’ recommended speeds and feeds, saving time and reducing frustration.”

Of usage, Matthews says: “Today, we have 24,000 registered users, 40% of those are in Europe. We view these customers as early adopters, shops who quickly adopt emerging technology to gain competitive advantages.

“Based upon our survey of these customers, they report time savings ranging from 25-75% when compared to traditional methods of paper catalogues, manufacturers’ websites and telephone calls. Using MachiningCloud, to date these customers have built 431,000 tool assemblies for 129,000 different jobs.”

MachiningCloud has many partners, including Iscar, Kennametal and Siemens, and while Sandvik Coromant is not one of them, Sandvik Group company TDM is (Sandvik Coromant is partnered with ToolsUnited, a US-focused cloud tooling data service, though – http://is.gd/9cduLM). 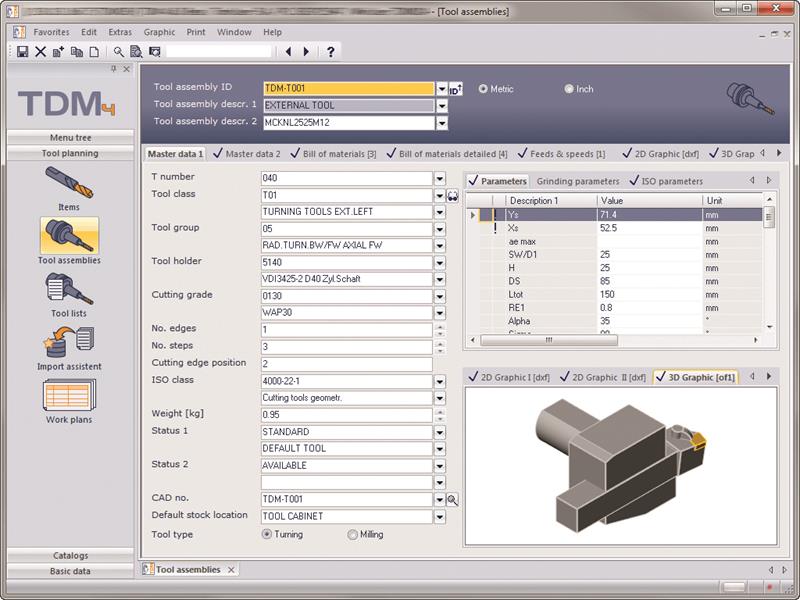 TDM would appear to offer the route to the greatest number of MachiningCloud-to-CADCAM system possibilities, but investment in both CADCAM and a TDM system is required. Tool presetter/management software firm Zoller is also a MachiningCloud partner; it claims 20+ CADCAM interfaces.

Next we covered Kennametal’s Novo cloud-connected offering, in December 2014 (see www.machinery.co.uk/67249). This is a cloud-connected digital tools suite that is available on PCs and tablets, and appears to interface directly with Esprit CADCAM and CGTech’s Vericut. The Novo suite supports: process planning; tool inventory availability and purchase; cost-per-part management; and productivity improvements. It requires machine tools with the MTConnect interface to fully benefit. MTConnect is a US-side development (www.mtconnect.org); it enables manufacturing equipment to provide data in structured XML rather than proprietary formats.

A case study example quoted on the company’s website involves a job shop that required new tooling suggestions fast. A Kennametal representative visited the company, but was under pressure to come up with a quote in a day or lose the business to a competitor. A quote would normally take one to two days, but by using Novo on the company’s shopfloor, it took just three hours, with Kennametal winning the business.

And now there’s another development. Siemens PLM Software, Sandvik Coromant, Iscar and Kennametal announced in January their adoption of GTC – yes, the same GTC that MachiningCloud employs. In fact, MachiningCloud and Aachen, Germany-based Cimsource were also participants in GTC’s definition.

Sandvik Coromant says that while ISO 13399 describes tools, it does not say how to organise tool data for a whole catalogue; GTC does (http://gtc-tools.com). A vendor-neutral generic tool classification system based on ISO 13399, both easier tool searching andCADCAM data import are benefits.

Switzerland’s NTB Interstate University of Applied Sciences of Technology Buchs maintains and distributes GTC, with its development sponsored by Sandvik Coromant, Kennametal, Iscar and Siemens (no mention of MachiningCloud or Cimsource in relation to that, incidentally).

GTC is supported by Sandvik Coromant’s Adveon product, as it is by Siemens PLM’s Teamcentre MRL. The latter can import catalogues in GTC format, starting from version 10.1.4, and enables use of tool data and 3D models to create tool assemblies that can be seamlessly used in the company’s NX software for tool assembly creation and in NX CAM for toolpath creation and simulation.

Kennametal’s GTC-related statement is a little more opaque. It says: “Kennametal is providing customers with product catalogues in the GTC format. Kennametal relies on Novo for its tool advisor and management application that will support the creation of GTC catalogues that can be imported into Siemens’ software.”

So, it’s all been happening. There’s technology push, but eager adoption or technology pull are another matter, with user case study information all but non-existent in the public domain (why not tweet us if you’re a UK user of one of these systems – @MachineryTweets).

But some issues are clear for those using tooling from multiple sources, which is just about every company, in fact. Regardless of its openness, Adveon is effectively a Sandvik Coromant-only solution. In similar vein, Novo is a Kennametal solution; indeed, it isn’t open.

MachiningCloud does boast multiple tool vendors and its claim of 24,000 registered users is impressive. There are benefits in its use without direct CADCAM connection, as Chuck Matthews highlights above, which is good because there are only a handful of CADCAM/MachiningCloud connections. But he says of that: “It is a relatively slow-moving industry, so we expect these connections to develop over the next 12-18 months.” 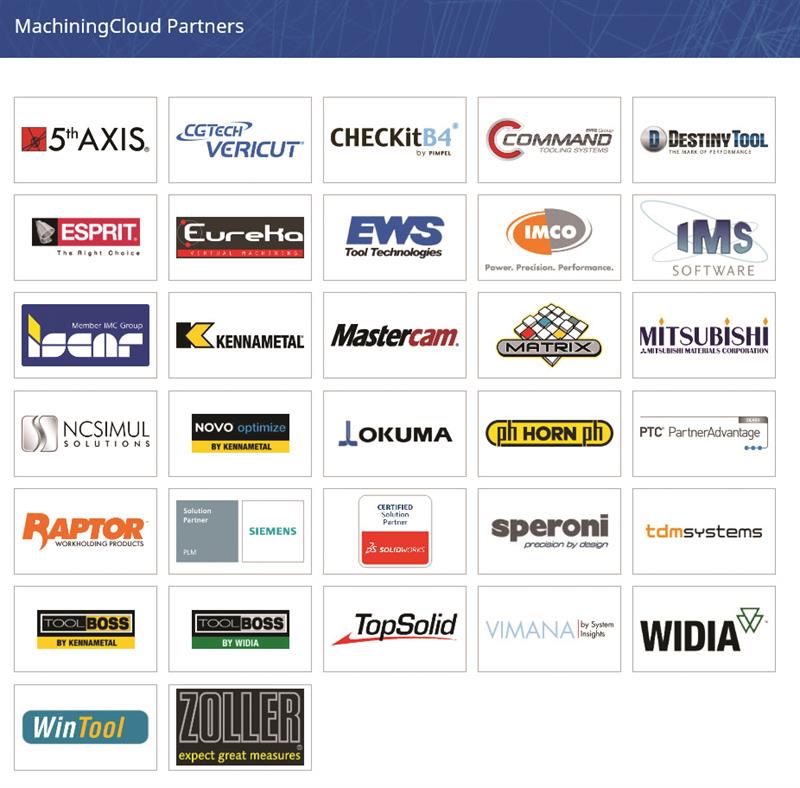 MachiningCloud displays its partnerships publicly on its website, and the company’s Chuck Matthews says more are on the way

Siemens PLM’s Teamcenter MRL is a system into which ISO 13399/GTC-compliant data can be poured, with its usefulness, as far as automatic data import is concerned, resting on tooling suppliers’ adoption of those standards. Same for TDM and Zoller to realise automatic import of data.

From a user perspective, it would be very helpful to have all tooling suppliers’ product and cutting data directly available and readily comparable and selectable within a CADCAM or PLM system. From a tooling supplier’s perspective, if free and direct comparison with any other supplier’s tooling could be made within a single system, that might be seen as a step too far – disintermediation of the buyer-seller relationship, in the language of the web. There is clearly tension between these two.

CAM in the cloud?