Andrew Allcock visited an established engineering subcontractor in the South of England to learn how it is expanding by building on existing strengths, adopting a strategy of diversification that involves key investments and more formalised systems.

The subcontractor (http://gwmartin.co.uk) has set out on a path that builds on what it has been doing successfully – but without much fanfare – to grow its business, with the 45-employee firm taking on a business development manager to front this latest quest for faster growth.

Based in Eastleigh, Hants, the company is rooted in precision turned parts. It was founded in 1959 by George William Martin, who had risen from engineering apprentice to works manager of Pratt Burnerd at a young age, and the company developed a strong reputation in stainless steel machining, with clients that included Sealol Inc, GEC, Honeywell Controls, Phillips and Pratt Burnerd. The car industry was an important sector for many years and remains so to a lesser extent today – defence is the firm’s strongest suit, offering predictable long-term contracts, with automotive, filtration and then less demanding commercial sector work thereafter.

Following its initial establishment in a small unit in the town, GW Martin moved to a bespoke factory on freehold land in 1967; subsequently trebling its size. The company was early into CNC, being one of the first to acquire a Miyano CNC machine in the mid-70s, and grew to employ over 100 people at its peak in the early 80s.

It remains on the same site today, in what is a traditional single-storey, north-light style main building complemented by a separate storage building. There is plenty of land for any required expansion.

Inside, and reflecting its high volume automotive history, the company still retains two cam-driven Wickman multi-spindle machines, with one operating on a permanent set-up for a specific high volume job. However, investment in new equipment is notable, with over £1 million-worth of new plant arriving over the last two years. Offering lower set-up times and greater flexibility, the subcontractor boasts an Index MS 32 CNC multi-spindle (Geo Kingsbury, 02392 580371) for other high volume parts, with this part of a cell that includes a Citizen sliding-head CNC machine (Citizen Machinery UK, 01923 691500).

The shopfloor has benefited from a new floor and high-performance, low-cost LED lighting, powered by roof-located solar panel-generated electricity

The original machining focus continued after the passing of the founder in 1984, under sons Richard and Graham. Richard suffered a stroke during the 80s, leaving Graham, a chartered accountant, to lead the firm. Investment in latest high quality production kit has remained a theme throughout. Of late, the firm has grown over the past five years, mostly with an existing client base, from a company employing around 35 to its current size and a turnover of about £5 million. But with succession plans required for long-serving, experienced managers and skilled workers, Graham’s nephew Stuart Yalden was invited to join the firm some five years ago, learning the business for three years before taking on the role of managing director.

A chartered civil engineer used to working within large professional firms, his mark is already visible. The existing main factory floor has been resurfaced (picture, right) to deliver a cleaner feel and more delineated layout, while LED lighting sees a brighter environment, with roof-located solar panels adding their energy-saving credentials to that. Waste reduction in areas such as metal and packaging are other initiatives falling within an ISO 14001 project that Yalden led on first joining.

Things that the company has always done, such as apprentice training, have been given a higher priority and more formalised structure to deliver more broadly skilled individuals and to maintain job interest. A now-reinforced skills matrix operates across the company.

Also, the appointment of a business development manager with engineering credentials earned in the machine tool sales arena, Richard Blake, was made just over a year ago, and a new ERP system is currently being implemented.

Blake is driving diversification, based on assembly and associated supply chain management as the central strategy, supported by a proactive marketing approach, with an early business win at the Southern Manufacturing exhibition this year. Adding another 30% to turnover in the next two to three years is a target.

Explains Yalden: “We have very strong relationships with existing clients that will deliver some growth, but the strategy for the business is to broaden that and develop some specific capabilities that reinforce our core service of CNC machining. Specifically, assembly and supply chain management; taking all the sourcing worries away from clients and providing them with a complete sub-assembly.

“We have won a key new client that was struggling to manage the problems and details that come with subcontracting. We are finding that there is an appetite for that in the market. We have undertaken assembly and supply chain management for some of our customers for some time – which is why we have such strong relationships – but have never championed it; we probably undervalued it, to be honest. We have built a new assembly room of modest size that we can expand, and have two new clients using that facility.” Previous assembly work was purely mechanical and in existing sectors, but the new key contract involves an electro-mechanical product. 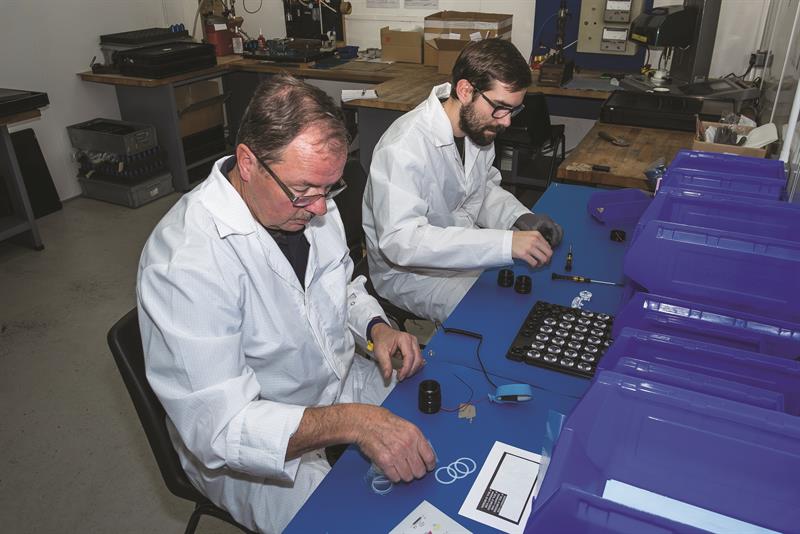 Kyle McCarthy and John Trulocke, nearer the camera, in the new assembly area

GW Martin’s existing design-for-manufacturing capability supports this expanding effort, he adds; another underplayed strength. “Our clients’ expertise does not necessarily lie with CNC machining, as their business and expertise are focused on other areas, such as product development and creative design. So we can support their design development with our expertise in order to achieve a successful outcome for us all.”

Adds Blake: “Rather than buyers looking for the best price, today many companies have supply chain managers that look at the whole supply chain. So they see they are spending this much, but want to spend less in total. That is a different philosophy and we can support their efforts with our new services, helping them to reduce their supplier base and the associated internal management costs.”

And the new ERP system, EFACS from Exel (0115 946 0101), is part of being able to manage supply chains, Yalden explains: “We had a long hard look at what’s out there; quite rightly, because it underpins the business for the future.” The company has been able to integrate existing systems that work well but gain better and new functionality in a flexible package that will be supported over the long term, he says. Adds Blake: “I am already using this as a USP. The new client has signed up for a three-year contract; he has eight or nine different models and each model has 17 parts.

Of those 17, we make only four or five parts for each model. With an annual quantity of up to 6,000 assemblies in total, we supply on a monthly call-off, based on a rolling three-month forecast. Now, without the ERP system you’ve got to get very good at Excel. With the ERP system, we receive an order and enter it, and we get what quantity we have got to buy, where to buy, how much they cost and what the lead time is. It’s a fantastic system.”

Still being rolled out, the system is already offering major benefits. To come is manufacturing control and a shop floor data capture system delivering live progress information and which will “drive efficiencies”. In keeping with that theme, Edgecam CADCAM (01233 506100) has also been implemented, with post-processor effort undertaken to ensure ready-to-run collision-free programs for the Miyanos to support efficient manufacture of lower volumes, Yalden points out.

A CRM module within EFACS is supporting the building and management of a prospect list that currently numbers some 100, underpinning a more proactive marketing approach that is already helping to bring in more enquiries on a regular basis.

GW Martin is moving from ‘precision machining’ to a broader ‘precision manufacturing’ operation; indeed, that one-word change is reflected in an updated company tagline. But it is building on established foundations of precision machining, backed by high quality equipment and home-grown skilled individuals.

Supply side: Show of strength