The AMRC Training Centre is the culmination of several years' effort on the part of local employers and organisations around Sheffield and Rotherham. Andrew Allcock explains the background and what makes this engineering apprentice training initiative so special

The 5,500 m² AMRC Training Centre (www.amrctraining.co.uk), located on the Advanced Manufacturing Park (AMP) between Sheffield and Rotherham, saw its official 'employer launch' in January. Outwardly, the centre looks just like many modern, box-type industrial estate buildings, but, inside, it is very different from any traditional engineering training school, not only in layout and standard of equipment, but in the content of its offering. The training centre has its roots in an effort dating back to 2008. It stems from a desire by local employers to train high quality engineering apprentices, but it is a much broader initiative than that today. One of those employers is subcontractor Newburgh Engineering, a family concern established in 1939, which has sites at Bradwell, Hope Valley, Derbyshire and, latterly, Rotherham, South Yorkshire, opened in 2004. Chairman Vince Middleton explains that, in its original, isolated location in Derbyshire, Newburgh successfully trained its own year after year. "We just carried on; people knew how to train people; it just happened." However, when setting up in Rotherham, things changed. The company took on apprentices in the traditional manner, he explains, via apprenticeships' website Connexions and schools, sending them to colleges; but he pulls no punches in describing the results as "absolutely useless". The calibre of entrant was "dire" and, after a couple of years of trying, the company turned to recruiting "supposedly skilled" people already employed elsewhere, but discovered again that they were "useless". What the company hadn't appreciated was that, while it had continued its own traditional in-house training activities, elsewhere this had stopped. And, attending an apprenticeship event in 2007, he reports that he didn't recognise the picture that was being painted. "Apprenticeships were deemed to be basic qualifications for less intelligent people without any future. It was nail technicians, car mechanics; all at a basic standard. With further digging, we discovered that, with the NVQ system and other things, colleges had started delivering to the lowest possible common denominator, deriving maximum funding for least effort. "The standard of training delivered up to, say, 2008, was, at best, a full-blown apprenticeship that was 25% of what we would understand an apprenticeship to be. They might have been okay for making washers, but that commodity end of engineering was never going to survive in the UK. Newburgh Engineering has always operated at the high end of engineering; medium-sized parts, but precise, critical, high value components, made in relatively low volumes." THE CHOICES ON OFFER The company's chairman details the choices on offer in 2008: "We could start a wage war to attract what few people there were; over-train, and train everyone else's; plan for a 20-year exit from the business; or get everyone together to address a common problem." The latter route was chosen, with a meeting that year held at the AMP that included "most of the key players in the sector". One of those key players was the AMP-based AMRC with Boeing organisation (part of the Sheffield University AMRC Group that today also takes in the Nuclear AMRC, Castings Technology International, Namtec, the AMRC Knowledge Transfer Centre and the just announced Medical AMRC; with elements of the AMRC Group part of the government's High Value Manufacturing Catapult - www.amrc.co.uk). The result was a definition of what an engineering apprenticeship should be, with Rotherham-based Brinsworth Academy of Engineering, a private training organisation, engaged to deliver what became known as the Employer-Ready Apprenticeships programme. This was, and continues to be, a 12-month off-the-job training programme. After that, the employer group prompted the creation of Work-wise (www.work-wise.co.uk), a local initiative to take the engineering message to school children, help them make their subject choices, get them into good quality work placements and run events to drive engineering interest. The employer group also influenced the curriculum of Sheffield's University Technical College, too, which opened in September 2013 (UTCs offer 14-18 year olds the opportunity to take a technically-oriented course of study). This ultimately led to the new training centre, following a bid submission to government in 2011, resulting in a £20 million investment, supported by European Regional Development Funding, the Regional Growth Fund, the Local Enterprise Partnership, Chambers of Commerce, EEF, the Skills Funding Agency, Business Innovation Services, the University of Sheffield, plus equipment suppliers (Haas Automation [01603 760539], DMG Mori [0844 800 7650], Huvema [01283 791166] and Baileigh Industrial [024 7661 9267]), and backed by almost 50 regional employers (some are also tiered members of the AMRC with Boeing or the Nuclear AMRC), including Rolls-Royce, Tata, Sheffield Forgemasters and AES Seal, with the smallest company being Ironbridge Engineering, with around 20 employees. 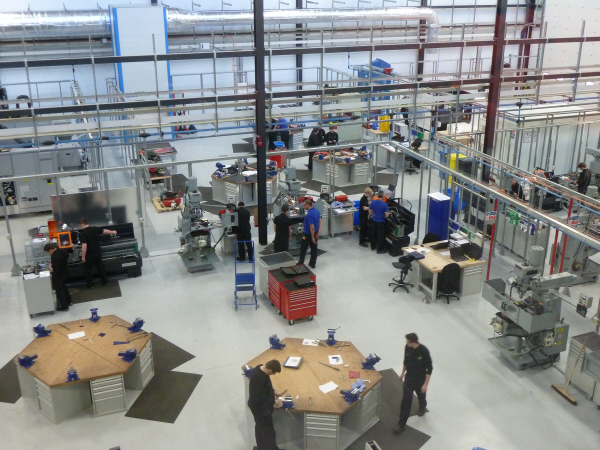 Modern workshops and facilities abound The centre aims to take in some 250 employed apprentices annually, processing them through three- to four-year apprenticeship frameworks. Operations commenced in October last year with 150 apprentices, although this new building opened on 6 January. A further 32 apprentices will be taken on next month (April), while an entry of 220 is scheduled for this September. One individual among the original group of employers pushing the project, Alison Bettac, initially at Sheffield-based Firth Rixon, became the key individual driving the AMRC Training Centre project from May 2012 and today is its director of training. She says that the centre "has a unique offering" that provides "a joined-up approach, offering end-to-end provision" and that it is "probably the first of its kind in the UK, within a single facility with our partners [Sheffield University, Sheffield UTC]". While the core of the centre's focus is training engineering apprentices (Advanced Apprenticeships, Level 3), it extends its reach both before and after that. The integrated nature of the education/training programme offered is encapsulated in the box on page 14, in detail. In overview, this takes in activities that stimulate interest in engineering, so creating a pipeline of individuals interested in the sector and who will then become employed apprentices at one of the centre's associated companies, with the possibility to progress, academically, through to industrial doctorates, while a continual professional development offering extends learning over an individual's career. The breadth of apprenticeships is also wider than the norm, taking in business administration and technical sales, too (see box, below), because these are individuals who must understand the technical environment, if they are to best support it. 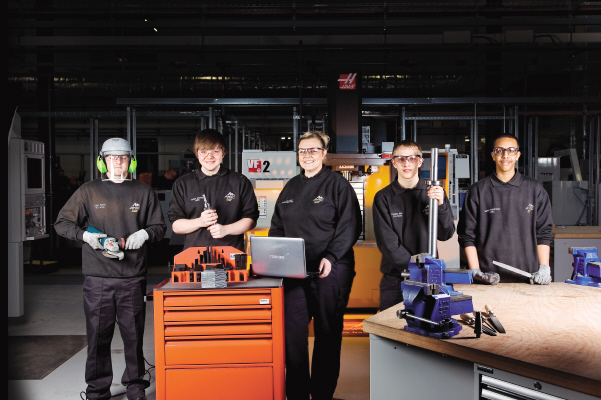 There is a wide breadth of Level 3 apprenticeship pathways on offer And in addition to technical training, there are further educational areas, such as 'employability skills' so that they "understand the world of work, before they get into it", Ms Bettac offers, adding: "When I was an employer, lots of apprentices were very green; they didn't know how to talk to people or that they should turn up on time. It is those core values that we need to instil in young people today." And some of the training centre's apprentices making their own presentations on the day were able to demonstrate a level of maturity and confidence that is definitely not the norm. Other additional skills elements include financial skills and driving safely, delivered through what Ms Bettac calls Master Classes, with some of these delivered by some of the training centre's suppliers and partners, in fact. All apprentices will become STEM ambassadors, promoting the engineering message in schools and at events, and all will be a member of a professional institution. NOT 'BOG STANDARD' So these apprentices, to paraphrase a well-known apparel/food store, are not just apprentices, they are AMRC Training Centre apprentices – Level 3 is the minimum aim, but, as Newburgh's Mr Middleton puts it, they are degree-capable individuals. He explains further: "The problem we face is re-educating people. Forget the word 'apprenticeship', with regard to what the rest of society understands an apprenticeship to be; this is a proper apprenticeship – we need a new name or brand, really. We are after degree-capable people that want to work in this industry and can progress. "Way over 90% of our [Newburgh's] personnel are past apprentices, but, today, many would have gone off and taken a degree." With the AMRC, however, they can progress to graduate level and beyond, via an apprenticeship, because there are defined pathways. And the demand? Well, in the case of Newburgh Engineering, there were 400 applicants for six positions. Its chairman again: "Six years ago, we would have got six applicants for six positions and we wouldn't have wanted any of them. Recently, we filtered 400 down to 25, which went through the AMRC Training Centre selection process for the six places, but we would have taken all 25, if we could." The AMRC Training Centre is a massive achievement, but Mr Middleton points out that, even if it turns out 300 Level 3 apprentices a year and Brinsworth Engineering Academy does similarly – so 600 high quality engineering apprentices – that's a good start, but not the whole answer. In South Yorkshire and Humberside, there are some 170,000 engineering employees, 10% of which should be apprentices, or an intake of 5-6,000 a year for a three-year, typically Level 3 apprenticeship, he suggests. So, clearly, there is a need for many more resources like the AMRC Training Centre and/or for those involved in running engineering apprenticeships elsewhere to raise the bar – nationally. In fact, other members of the High Value Manufacturing Catapult are emulating this first effort, so momentum is, happily, already building. Box item 1 A continuum of training and education The AMRC Training Centre offer provides for the possibility of progression from one level to the next: [] Education Centre – STEM Programme – for 11-19-year-olds and intended to support talent pipeline growth; [] Advanced Apprentice Scheme (Level 3) – unique multiple discipline scheme offering up to four years' engineering and technology academic/practical skills training from 16 years+; [] Higher Apprentice Scheme (Level 4) – two-year academic/practical programme that enables progression from Advanced Level to degree standard – 18 years+; [] Higher Education – offering progression to degree level in relevant advanced manufacturing and leadership subjects; [] Graduate Training – practical engineering skills offered to university leavers to support the application of theoretical knowledge; [] Industrial Doctorate – practical, academic research project-based programmes that enable emerging technologies to be tested and knowledge transferred; [] Continual Professional Development – Multiple programmes. Box item 2 Apprenticeship pathways Within the apprenticeship offering, there are a number of Level 3 pathways or, more colloquially understood, 'trades'. These are: machining; maintenance (mechanical, electrical, electronic and fluid power); electrical and electronics; mechanical manufacturing; fabrication and welding; business administration; technical sales; metallurgy, composites; technical support (design and quality assurance); polymers (planned); forgings (planned); and food engineering (planned). The planned activities will demand an extension to the training centre building, in fact. To be introduced in September this year will be Level 4 pathways (Foundation Degrees) of: mechanical engineering; electrical/electronic engineering; with materials engineering planned. All pathways have a progression route to higher education. Twenty-six and 47-week off-site apprenticeships are offered, with the 26- week option delivering basic engineering knowledge and the longer scheme adding extra elements of specialism and understanding of lean manufacturing, for example. Modern workshops, with up-to-date equipment support training, while meeting and break-out rooms are also available. First published in Machinery, March 2014

Altus, a leading supplier of capital equipment in the UK and Ireland, has added to its vapor phase soldering product ......

METAV moved from March to June

METAV 2022, the International exhibition for metalworking technologies that takes place in Düsseldorf, Germany, that ......