Stratasys has a new approach for developing its non-metallic 3D printing technology: devising solutions to particular production problems, as guided by industrial partnerships. Two technology demonstrators destined for the IMTS show in Chicago this month declare its intentions. Will Dalrymple saw them up close

Over the past decade, as 3D printing (in plastic) has leapt into the public imagination, so it has crept into industry. It started perhaps in the design studio as a rapid prototyping tool through which sample designs could be knocked out overnight without tooling; the benefit of having the design in hand next morning outweighed the drawbacks of inappropriate material.

Alongside that, production tooling items for the shopfloor – jigs and fixtures – have also benefited from 3D printing. They share some of the qualities of prototypes: they are all extremely low volume, if not complete one-offs, designed to do a specific job. Here, 3D printing’s production speed is a huge boon. Another benefit is great design freedom in part complexity: once designed, intricate parts are as easy to make as simple ones. For example, Volvo Trucks has used Stratasys 3D printers (SYS Systems, 01283 585955; Tritech 3D, 01782 814551) to make production tooling, including a two-piece bumper lifting jig that replaces a 28-piece assembly. (Although convincing factory staff to let go of their metal tools may require overcoming ingrained thinking.)

Part of a factory jig for lifting a Volvo truck bumper, made in a commercially-available Stratasys Fortus FDM 3D printer, that replaces a 28-part assembly

As one of the world’s largest manufacturers of 3D printers, Stratasys now has its eye on the real prize in manufacturing: production parts, a much larger market. Now having an installed base of 150,000 machines, company co-founder Scott Crump still remembers the first shipment of printers using the fused deposition modelling (FDM) process he invented, in which a head melts a plastic filament and extrudes what it calls a semi-molten thread under high pressure and in a heated environment. Stratasys not only makes the printers, it is also the exclusive supplier of proprietary feedstock formulations that it fabricates.

In a maturing market where there is a creeping realisation that 3D printing will not replace every single injection- moulded or machined component, Stratasys’s sales strategy has changed tack. Its newly-promoted CEO, Ilan Levin, a former president of Objet, the company that Stratasys merged with in 2012, explained the plans at a press conference near its Minnesota headquarters last month. He says: “As we go forward at Stratasys, I think that you will see more and more meaningful applications around our basic processes. It will no longer be the development and sale of a particular process and having our customers figure out how to use it.”

This approach puts the technical onus on Stratasys to connect all of the technical dots required to solve a particular problem. Levin adds: “Today we have materials, hardware, software -- we sell services in different forms, whether with respect to particular services or for parts. I think that the value that we can generate for our customers is necessarily by the integration of all of those different elements.”

So instead of reinventing the 3D printing wheel by continuing to develop new printing technologies, Stratasys will go deeper into particular applications in specific markets. “As we look to expand the universe of applications, specifically in manufacturing, we at Stratasys are evolving our approach to a more customer-centric, use-based approach,” says Richard Garrity, the company’s new head of the Americas markets (the opposite number to the local regional head, Andy Middleton, president of Europe, Middle East and Africa).

Garrity personally has been instrumental in this development, as he was previously head of the company’s vertical solutions business unit teams (covering aerospace, automotive, medical, dental and education), learning the needs of customers in strategically important segments seen to be friendly to 3D printing. Over the last three years, the teams have grown from a few people in an obscure office to tens of people, firmly in the corporate mainstream.

Just such an application is non-structural, non-metallic commercial aircraft parts. It’s a growing market that is driven by multiple pressures: increasing production volumes, weight reduction and mass customisation to provide a different look and feel to each airline.

Although 3D printers may have been able to offer something in the last two areas, at least, build volumes have previously been too small to make complete parts that don’t require subsequent assembly. Stratasys’s new technology demonstrator, the ‘Infinite Build’, whose commercial launch date and final form remain indefinite for now, but which will be shown at the IMTS show in Chicago this month, tackles that.

An early version of the new machine turned a Fortus 400mc FDM machine on its side, tipping up the build plate so that the part extends horizontally, making possible the production of metres-long parts. A later, bigger variant demonstrated last month features a build plate that is 48-in (1,220 mm) wide by 30-in (760 mm) tall, upon which a 2-axis plotting system positions the extruder head in an oven capable of reaching 200° C. 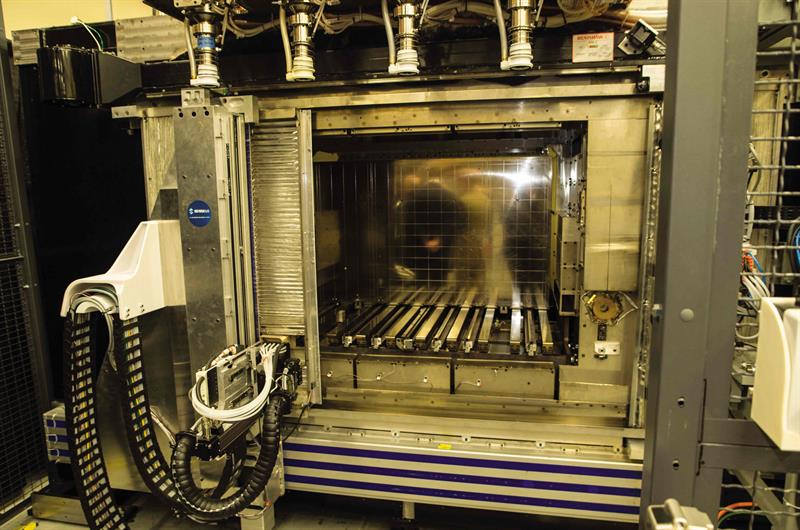 Looking inside an empty early incarnation of the Infinite Build demonstrator oven, with vertical build plate at rear. 3D printing carriage (without head) is bottom left, refill canister nozzles are arrayed at top

Performing such large-scale builds requires lots of feedstock, so the company has developed a new head said to extrude at 10 times greater volumetric flow than its standard filament unit. It uses a miniaturised single screw extruder that feeds a new ‘micropellet’ form of thermoplastic stock material that is also fabricated by Stratasys (it resembles semolina flour in colour and grain size). This extrusion technology and process is not so new: first, Stratasys uses it internally to make 3D printing filaments; second, it has built and runs several benchtop development stations for testing them under normal operating conditions. On the drawing board is an extruder with a maximum flow capacity 10 times higher than the new screw extruder shown; a range of heads is likely to be developed for the ultimate commercial offering.

The extruder head can be automatically refilled from one of four 30-pound capacity top-mounted feedstock canisters, allowing the build process to run for about a week at maximum build rates, without attention. However, the system is equipped with a four-station toolchanger, allowing the robot to swap heads, potentially allowing two compatible materials to be used in the same build layer, a capability new to any Stratasys machine. This feature also enables use of in-process probing, to help improve build repeatability: at a certain pre-set part length, the system performs an index, backing the part away from the head, then moving back, for a touch-probe to find the part in space, before starting the next layer, all within a few seconds. Four tools are held in the local toolchanger; up to 16 more can be moved into the system via a secondary toolchanger station with the help of a Kuka (0121 505 9970) robot installed at the rear.

The demonstrator was developed with input from industrial partners Boeing and the Ford Motor Company. Speaking for Boeing, Teri Finchamp, Boeing Phantom Works’ director of operations and quality, says that it first used additive manufacturing in 1997, and first partnered with Stratasys in 2003. She adds that, for Boeing, additive manufacturing is “huge” for prototyping; it also uses 3D printing in part production, reporting that there are now 30,000 3D-printed parts flying in its aircraft.

For Ford, Dr Ellen Lee, technical leader of additive manufacturing research, says that the size and throughput offered by the Infinite Build machine would allow the carmaker to integrate and consolidate parts previously made as assemblies, to offer better functionality.

Another exciting area of non-metallic material development is composites, used for all sorts of structural parts in aerospace, automotive and other industries, but whose production methods remain largely manual and slow.

Scott Sevcik, Stratasys director of FDM platform development, says that industry has often enquired if Stratasys had a 3D printing alternative for particular composite parts that are difficult to make using traditional composite manufacturing techniques. Now the company has: a novel fusion of 3D printer, robot, and machine tool that offers fast, automated deposition of composite-filled (CFRP) parts without needing supports that are time-consuming to remove. 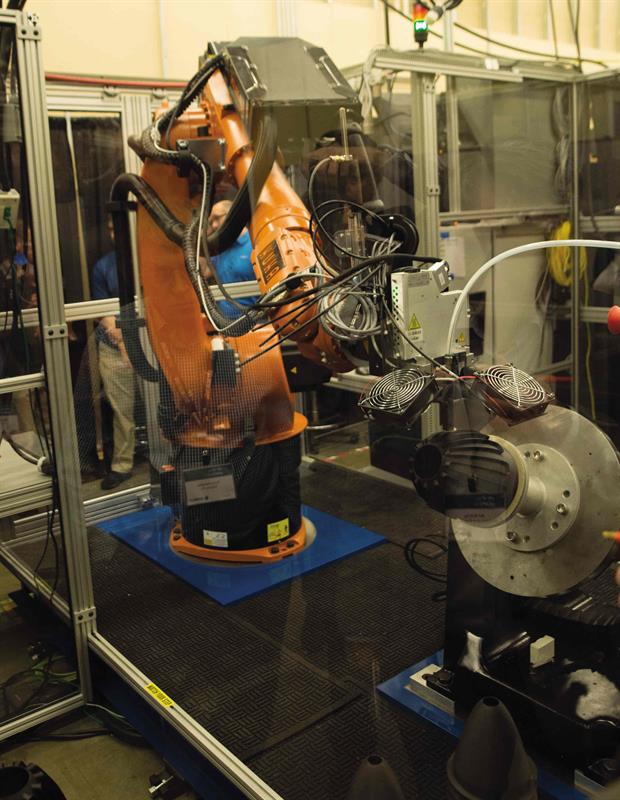 View of Robot Composite demonstrator in action. Extruder head is held underneath fans to cool the part. Infrared cameras monitor part temperature. CFRP filament is fed in via the white tube extending from right-hand side of the picture

Asked about practical applications, Mike Hayes, Boeing research and technology’s technical lead in polymer and composite additive manufacturing, responds: “For applications, where are we looking [to use] composites? The 777X wing. I am joking. That’s way, way down [the road]. We do a lot of composites; a lot of hand lay-ups; things that take a lot of time and labour. We’re trying to find the easy pickings first; where can we use it where it’s not flight critical, where we can demonstrate the process, the materials, and take cost out of our products. That’s what we’re focused on initially.”

Stratasys’s multi-axis ‘Robot Composite’ manufacturing tool mounts an extrusion head on a multi-axis robot arm; the build plate sits on a rotating tilting table. To be able to 3D print composites, Stratasys adds carbon fibres and thermoplastic elements to the material mix during feedstock fabrication. A process to make feedstock using a continuous carbon fibre strand, which would be stronger, is planned in future. Neither proprietary mix – nor the Robot Composite machine itself – has been commercially released.

Conical parts in a CFRP nylon material made via the Robot Composite demonstrator using spiral toolpaths; no support structures were required

Instead of extruding layers strictly in the Z-axis, as other Stratasys FDM printers do, the eight-degrees-of-freedom system is able to tilt the head as it extrudes in a continuous spiral; it builds from the inside out. It was demonstrated making a conical sample part at an extrusion rate of some 2-in/sec in a bead measuring about 0.02-in (0.5 mm) high by 0.04-in wide.

The traditional FDM toolpath is essentially two-dimensional, with a change in height only occurring at one point between layers in a simple Z-axis movement. But the Robot Composite head traces out a continuous spiral form, using variable head inclinations. Doing so strengthens the part and improves surface texture; it also removes the need for support structures that must be removed later.

Such a toolpath also requires adopting a sophisticated feature-based approach to CADCAM; this again was Siemens’ work, through its NX software that integrates design, engineering, optimisation and manufacturing elements. Instead of simply slicing a CAD file into horizontal layers fed to the machine control, Siemens software deconstructs a CAD file into 3D features and arranges them in build order – in this case, from inside out – for printing.

Although production of a palm-sized CFRP part was demonstrated (and will be again at IMTS), its build volume is, like the Infinite Build demonstrator, indeterminate. Part size is not limited to the size of the plate, or even the
2 m-plus reach of the Kuka KR60 robotic arm and DKP-400 rotary positioning table demonstrated, as a larger model or even multiple units could theoretically be used in future.

Said Siemens’ Saar at the launch event: “Somebody said yesterday, ‘Why are you using this huge robot to build this part; isn’t that overkill?’ I say, of course, for a little part like this, but you can dimension it like this [opening his hands wide]; you can build up; that’s what you can’t do today. You have this removal of [size] limitations of the traditional process.”

Stratasys and Siemens partner to incorporate AM into volume production