A 2,000 m2 forming scale-up centre for industry and academia scheduled to open in August is just the latest development of a Brunel University London institute that wants to change the UK’s industrial supply chain through improved light metal solidification. Will Dalrymple visited

Metal to be machined starts life in molten form, is then solidified, or cast, into a billet or other shape. Many metals undergo further treatment processes – forging or rolling, for example – to improve their properties prior to forming or cutting. “The fundamental question is, why do you need to do this prior processing before machining?” asks Brunel University London professor Zhongyun Fan, who continues: “[Because] the cast block is not good enough. If in the first place the casting is completed properly, and offers the engineering performance that you need, without doing anything you can machine that block into your component. The future is that casting is going to play a much bigger role to provide final components with the required performance. In other words, the manufacturing process from liquid metal to final component can be shortened into a much smaller number of steps.” This development would see reductions in production time, energy and cost; benefits that can be passed on to UK firms.

JLR, and more recently Nissan – funded by the Advanced Propulsion Centre, as well as Tier 1 aerospace and transportation aluminium part supplier Constellium (which has founded a University Technical Centre at Brunel) are some of the major supporters of the Brunel Centre for Advanced Solidification Technology (BCAST). These companies’ strategic priorities help drive BCAST’s agenda.

Headed up by Fan, BCAST operations include research in five centres at the university, including two new casting and forming scale-up facilities (see boxes at end of article) that aim to bridge the ‘valley of death’ between academic research and industrial production that will be brought together in two years’ time in a consolidated science park at its Uxbridge, Middlesex, London campus.

For the past 10 years, Fan and colleagues have been studying how light metals solidify when cast. During aluminium solidification, for example, a more-or-less random jumble of atoms in the molten metal forms solid crystals with a regular structure in the blink of an eye, initially by forming an unstable group of atoms known as an embryo.

“That process, forming an embryo, is poorly understood. In the last 10 years, BCAST has taken a world lead in trying to crack that hard nut, and made good progress. That’s more critical than anything else for controlling solidification,” he explains.

Although mostly applied to aluminium so far, its casting knowledge might, incidentally, be just what is needed to push magnesium metal into the engineering mainstream (https://is.gd/odawut). A third lighter than aluminium, it is of great interest in transport industry lightweighting, and production could be scaled up to meet demand. Fan argues that most magnesium research, to make the material formable as is aluminium, has been going in the wrong direction. Instead, it should focus on its great strength: castability. Demonstrating effective magnesium part production involves extending casting as far as possible toward the finished part to minimise subsequent operations.

To that end, BCAST operates, and has demonstrated feeding liquid metal into, a twin-roll caster that produces 1-2 mm-thick strip that can then be stamped into parts, without cracking. Even for aluminium, that twin-roll line offers benefits in short-circuiting the energy-intensive process of hot and cold sheet rolling that is also time consuming. 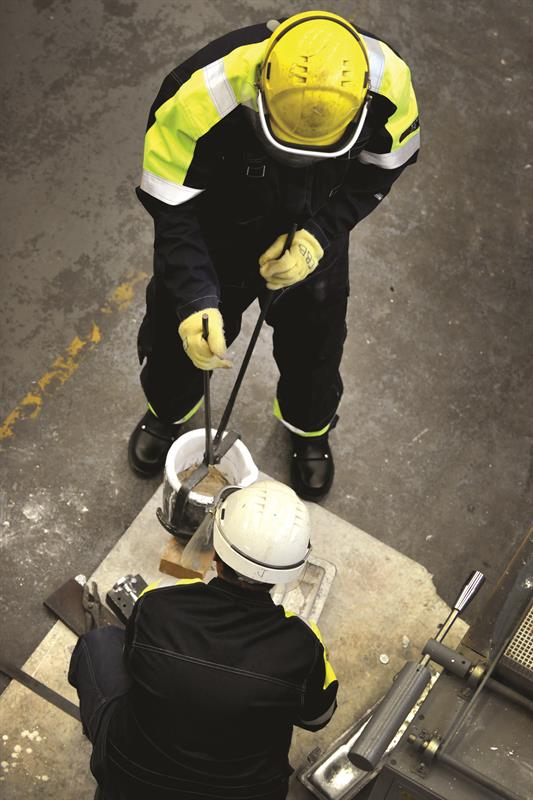 Mould preparation for ingot casting of a BCAST experimental alloy

Underlying Fan’s work is a green agenda that has helped attract government funding. He says that he wants to develop much greater recycling of light metals in the UK. “It’s not about primary production, it’s about utilising what metal already exists to save a huge amount of energy, a huge amount of CO2 while still having high engineering performance. That’s our overall vision of the future for metals,” Fan underscores.

In particular, he points out that the great advantage light metals have over composite materials is their recyclability, which contributes to a smaller carbon footprint.Smelting aluminium is energy-intensive, but recycling scrap consumes just 5% of the energy. That has resonance in UK industry, as not only is there an abundance of used aluminium here, but there is also local demand. The aluminium structure of a JLR vehicle currently includes 50% recycled material, and the company’s target is to increase that proportion to 75% in five years or so, the professor highlights.

He predicts recyclability will play an increasingly important role in automotive supply chains, suggesting that it will take third place after performance and cost concerns, saying: “In the future – and JLR is already doing this – [they will ask] where does your aluminium come from? How much recycled material is used? With primary metal, what [sort] of electricity was used to produce it: coal-fired or renewable energy? Because that forms part of their image. They need to know that. I think that in a not very long time frame, all of the OEMs are going to ask that question.”

Construction of the AMPC finished in April, with equipment installation and commissioning completed by August. It is to focus on forming of extrusions and profiles, using freeforming, stretch bending, magnetic pulse forming/welding machines, and MIG/transfer welding equipment. Funding of the £80 million project is mostly (£62 million) from industry. It comes at a time when BCAST is broadening its solidification research focus from liquid-to-solid transformations to include solid-to-solid ones, such as precipitation. For example, according to Fan, controlling precipitation of alloys can double the material strength of aluminium (compared to pure metal). To support the Advanced Metal Casting Centre (p16), the AMPC will additionally include shape casting capabilities in the form of sand casting and gravity die-casting.

direct-chill casting, die-casting, twin-roll casting and extrusion machines. Established in 2016, it follows the 2010-2014 (EPSRC) LiME project, and is funded by a seven-year, £10 million EPSRC grant.

[] The Virtual Engineering Centre provides simulation and modelling of solidification molecular dynamics, but also larger scale processes such as forming and joining. A highlight is a ‘virtual cave’ that employs 3D headsets to create an immersive virtual environment, particularly favoured by auto makers.

[] The Centre for Advanced Metals Characterisation deploys microscopes, from optical resolution to tunnelling electron microscopy, plus additional analytical tools, for the further examination of materials.