The Factories of the Future Expo exhibition held in Manchester last month (April), at the Central Convention Complex, was the showcase for a number of technologies that enable Industry 4.0 – the connected smart factory of the future. One of the companies showing such wares was Bosch Rexroth.

The company chose to underline its capabilities via a central demonstrator that was fitted with a number of sensors that could collect data. In this case, the data collected were connected with qualitative outcomes or equipment performance.

Bosch Rexroth’s Industry 4.0 demonstrator offered a live-action example of a networked assembly line at work. The mini assembly line guided visitors through the production of one of the company’s industrial controls by simulating work processes, which were carried out both automatically and by humans.

The intention of the demonstrator was to show visitors how Bosch Rexroth’s Industry 4.0 technologies are connecting humans and machines, in order to provide new potential for productivity, quality and efficiency.

Carrying an RFID tag, as a part travels along the system, the tag is interrogated by each work station to prompt the appropriate action. Relevant process parameters are recorded at each workstation and forwarded to a local or cloud-based analysis system. As a result, the product being manufactured can essentially ‘steer’ itself through the assembly line, while any possible errors are logged at each step.

But Machinery was told that the collected data could, apart from signalling specific issues of, in this case, too high a humidity level, too much or too little torque applied to assembly screws, or increasing heat generated from equipment motors, be analysed heuristically.

This would mean collected data that falls outside normal operating values, but which are not definitely within a known error range, could be flagged and subsequently confirmed as okay or otherwise, thus supporting machine learning and improving the system’s automatic capability. Of course, the affected part is known, if there is a problem. The associated images here show the demonstrator in action. 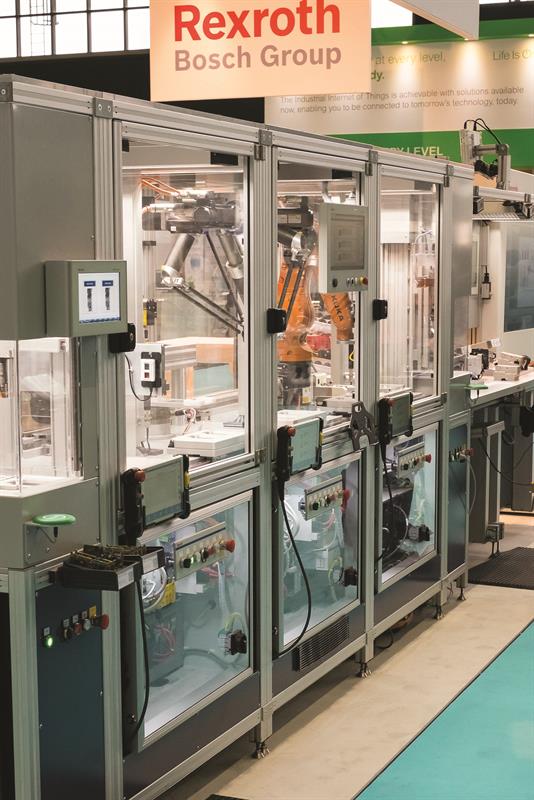 Above: The complete demonstrator 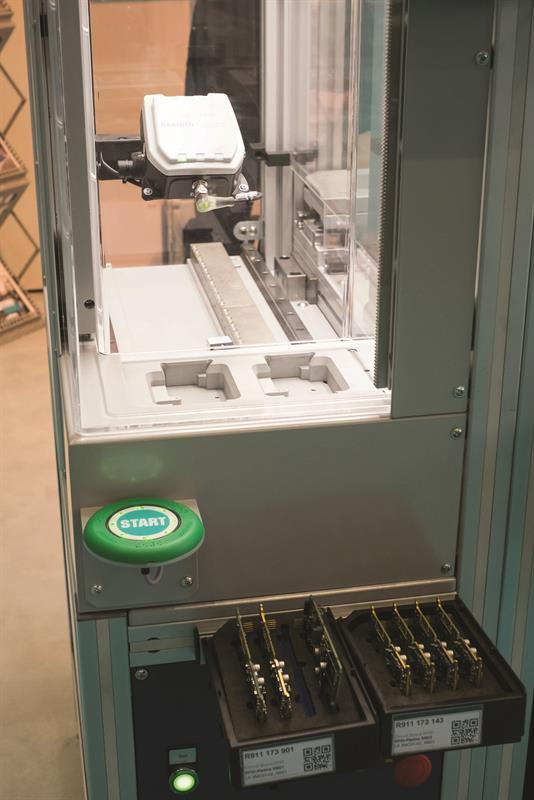 Above: The first stage sees assembled PCBs manually loaded to a two-position pallet. Carrying RFID tags, the PCBs are scanned as they are placed onto the pallet to identify which of two variants they are. Identical and dissimilar pairings are allowed. The RFID tag is loaded with pre-defined specifications outlined by the client before production. As the board passes through the assembly line, each station reads the tag and receives all of the instructions required for processing 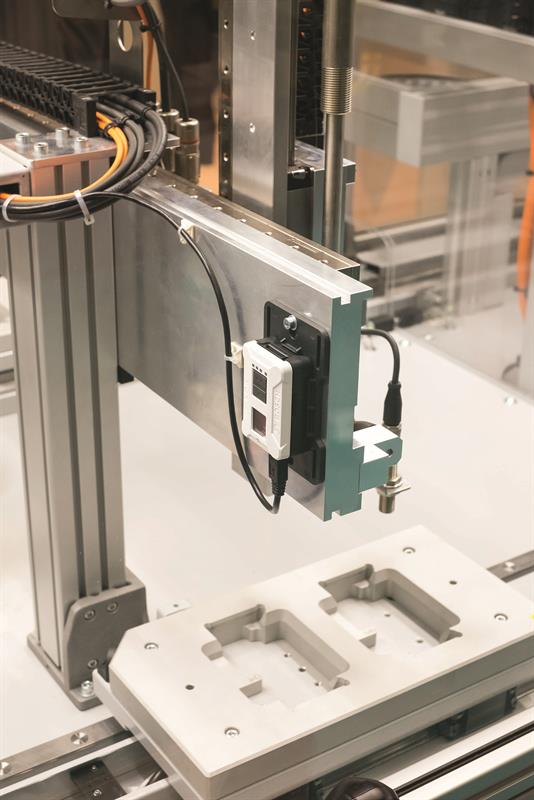 Above: The second stage is where adhesive is automatically dispensed onto the PCB, ready for the next stage of heat-sink component assembly. Fitted to the arm of the dispensing structure is a sensor that can measure both temperature and humidity. Variations here can affect quality of bond, with outside accepted tolerance levels signalling a suspect part 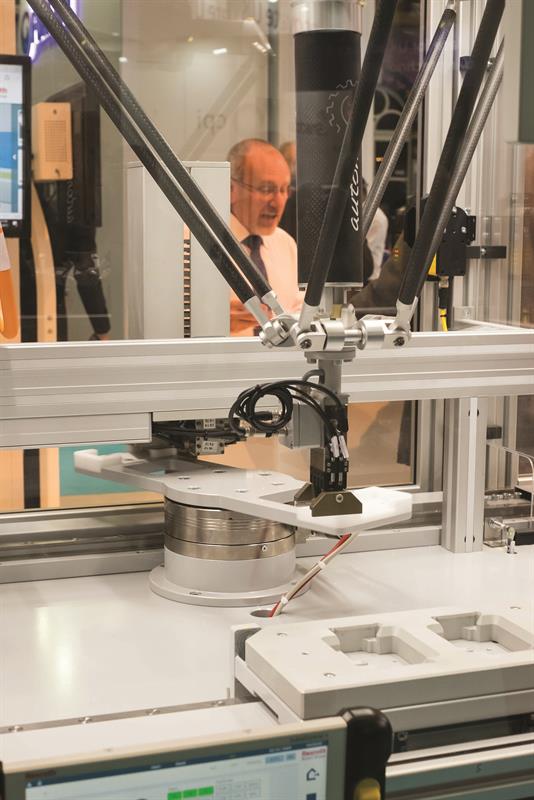 Above: Next, with glue now in place, the heat-sink component can be automatically placed in position by a robot of parallel kinematic design. Monitored here are the robot’s motors operating parameters, such as heat. A rising temperature is warning of impending equipment failure or the need for maintenance 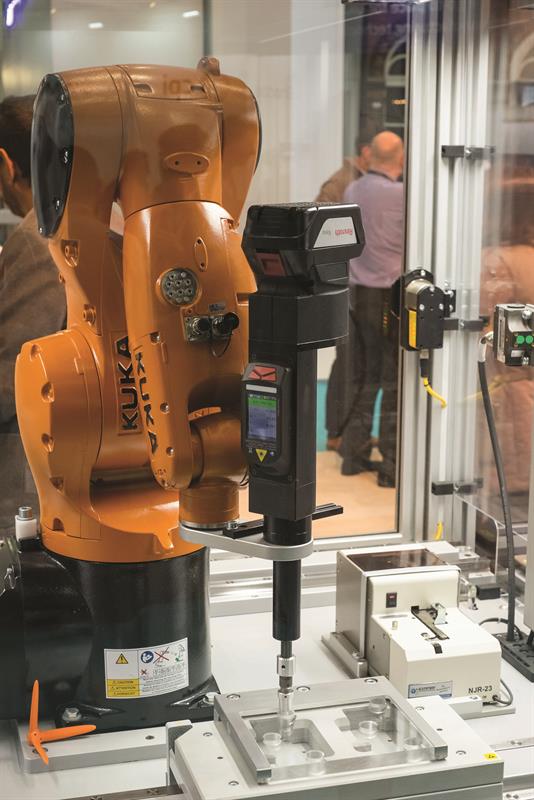 Above: The following stage sees screws inserted through the heat-sink component, again undertaken by a robot. The torque value is being monitored here, another qualitative piece of data 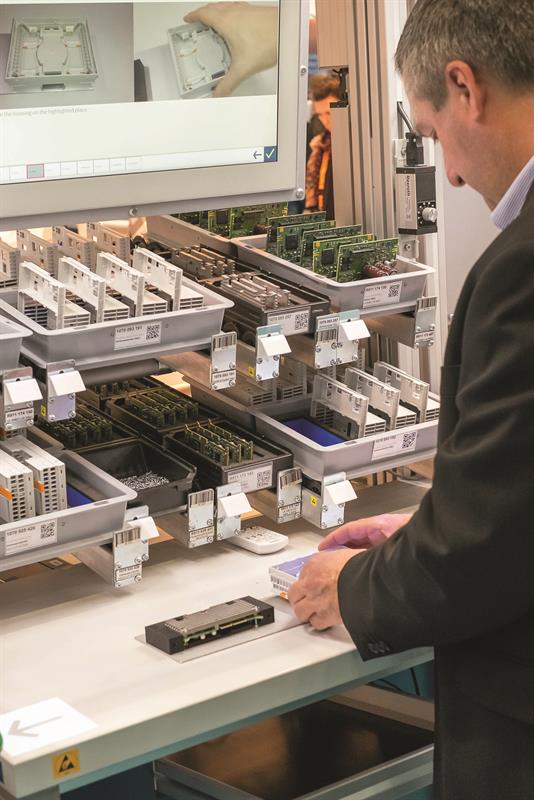 Abnove: The final station is a manual assembly process. In fact the Manchester event was the prelaunch of what Bosch Rexroth calls ActiveAssist. With all relevant parts for the two different assemblies available here, video sequences explain what actions should be taken, with lights illuminating both the part that should be taken and the location where it should be assembled.

Article first published in Machinery, May 2017

The shape of Industry 4.0

Taking a walk through the Industry 4.0 landscape